When building a Commander deck, most experienced Magic: the Gathering players will tell you that multi-color decks tend to be stronger. There are a number of reasons for this, such as how using more than one color can help make up for the weaknesses a particular color in your combination might have. Plus, multi-color decks have access to a larger stock of cards to choose from.

Going with three colors can be challenging, but it is also rewarding when you pull it off. Jeskai, made up of blue, red, and white, is one example of a fun tri-color combination you can build a Commander deck around.

Looking for the best Jeskai Commanders in MTG? You’re in the right place. We’ll discuss several of the best Jeskai options and some common questions people have regarding these colors in Commander.

Among many Magic players, Jeskai has another ironic name: USA. This is because the colors, when said in a different order, come out as red, white, and blue.

If you think that means Jeskai is an extremely aggressive color combo built around accumulating a huge army, you wouldn’t be entirely correct. Because of its use of blue and white, Jeskai has a large focus on casting instants, enchantments, and sorceries. Cards that reward you for casting these types of spells are almost always a good idea in these decks.

Furthermore, Jeskai tends to feature a lot of flying creatures that may be smaller in terms of power and toughness. This comes from its splash of blue, which often has many flying creatures of its own like faeries.

This is why more complex strategies, including spellslinging and politics, are popular with Jeskai Commander decks. You may want to avoid this color combination unless you have a bit more experience in the game. 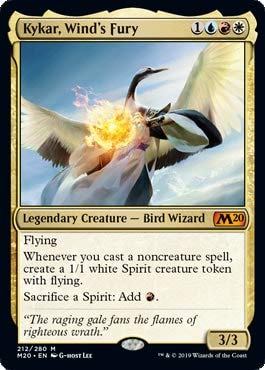 Kykar, Wind’s Fury was a card quite a few people were excited for when it was first released in the M20 set. In essence, it’s kind of like a combo in and of itself.

That’s because, whenever you cast a noncreature spell, Kykar will automatically create a white spirit token that has flying. Thus, the more instants, artifacts, enchantments, and sorceries you cast, the more your army of spirits grows. You can use them as blockers or even, if you have enough, send them at all your enemies as a wave of attackers.

But most people will likely use the spirits with Kykar’s second ability: sacrificing one for a single red mana. With enough spirit tokens on the field, this gives you access to a large pool of mana that you can tap into at virtually any time. 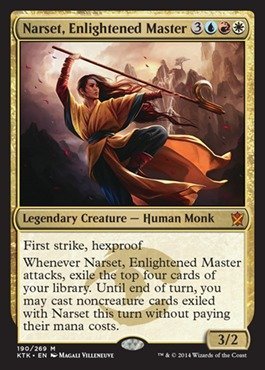 This is a card we ended up including on our list of the best hexproof cards in MTG. There’s a lot to like about Narset, Enlightened Master as a Commander.

Obviously, she has hexproof and first strike. You can easily use her as an aggressive creature to smack your opponents around with, although we feel that oversimplifies her worth.

The best part is her second ability. On top of being a great attacker – especially if you can boost her power a little – she effectively lets you cast up to four spells for free every time she attacks. Be sure to stack your deck with powerful and costly (mana-wise) noncreature spells whenever you build a deck around Narset. 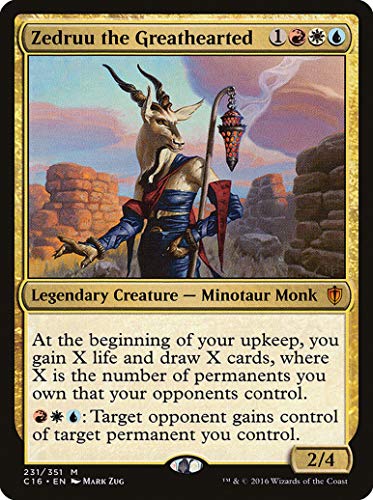 Political decks, although complex, are some of the most fun decks in the game. These decks use sneaky, roundabout strategies to build alliances and rivalries with players around the table. And when we think of a political deck, one of the first Commanders to come to mind is Zedruu the Greathearted.

Zedruu has a sophisticated strategy. You benefit more from giving your own permanents to opponents at the table. The more of your permanents opponents control, the more life you gain and cards you draw at the beginning of your turns. 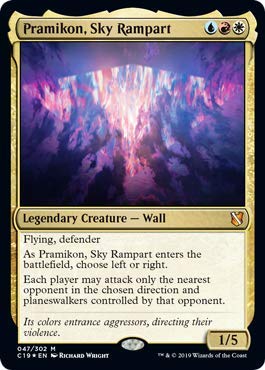 Pillow fort is a strategy that Pramikon, Sky Rampart best represents. Basically, it means you are creating a litany of incentives for opponents not to attack you while you sit back and build a stronger presence on the board.

Pramikon achieves this in a couple ways. The most obvious one is that it’s a flying defender with a power and toughness of 1/5, so it wouldn’t be beneficial to swing into early on in the game, anyway.

Additionally, Pramikon limits who can even attack you in the first place. You get to choose left or right, and then players can only attack whoever is nearest in the direction you chose.

Choose carefully with Pramikon. Ideally, you’ll pick a direction with your opponents’ board states in mind. If you know someone to your left or right doesn’t have a lot of creatures in your deck, you can set it up so only they can attack you. Likewise, you can evaluate if someone has too many creatures on the board on either side of you and set it up so they can’t attack you. 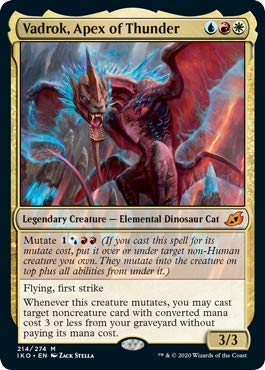 If you play your cards right, mutate is a fun mechanic to experiment with. In a nutshell, it lets you combine multiple creatures with mutate to gain access to all their abilities in one mega-creature.

Sound interesting to you? Then you may want to use Vadrok, Apex of Thunder as your Commander. Aside from being a mutate creature, it has both flying and first strike, which means it’s an excellent blocker and attacker.

Furthermore, whenever you mutate with Vadrok, you can cast a single noncreature card from your graveyard for free, provided it costs three or less mana. It isn’t difficult to stack your deck with powerful cards that cost three or less mana. You’ll just also need to balance those with enough mutate creatures to get the most out of Vadrok.

Are there any Jeskai preconstructed Commander decks?

Interested in playing a Jeskai Commander deck, but don’t feel ready to build one of your own? The good news is that doesn’t mean you have to surrender the possibility of ever playing one. You can purchase preconstructed official Commander decks that come with everything you need to start playing.

There are two excellent examples of recent Jeskai Commander decks you can use. You can go with this Sevinne deck or this Gavi, Nest Warden deck deck.

Jeskai can be a bit sophisticated, as far as color combinations ago. If you’re willing to put in the time learning how various card combinations work or you’re already a more experienced player, this isn’t a problem, though. We’d highly recommend this combination if you want to experiment with complex tactics.

You may want to take some time to explore some powerful combinations you can potentially utilize in your deck, though. Here is our guide to the best MTG Commander combos. Not all of them use Jeskai cards, but you should have a few options in there that would work for a red, white, and blue deck.