Have you ever caught yourself wishing there were a way to make a specific card in your deck just slightly stronger? That’s precisely what the kicker keyword does in Magic: the Gathering.

If you have the extra mana, you can up the effectiveness of these cards. That’s what makes them something worth considering for just about any deck you’d make in which they would be legal.

In today’s post, we’ll take a look at the best kicker cards in MTG. We’ll also answer some questions about the kicker mechanic, so you understand how it works by the end of the guide.

Use These Links to Navigate this Guide >>
What is a Kicker Card in Magic: the Gathering?
Best Kicker Cards in MTG
Common Questions about Kicker Cards
Wrap Up

What is a Kicker Card in Magic: the Gathering?

We mentioned it briefly in the introduction, so you have some idea of what kicker means, but we’ll go into a little more detail here. What, exactly, is a kicker spell?

Kicker spells start off like any other. They are spells you can pay a basic cost to cast. What makes them different is that they have an additional cost you can pay for an extra effect.

Many cards have abilities you can pay for after costing them, such as artifacts with activated abilities. The difference here is that kicker cards will have the word “kicker” on them, listed alongside some cost you must pay. The kicker cost can only be paid at the time of casting the spell, unlike activated abilities that can be used after casting. 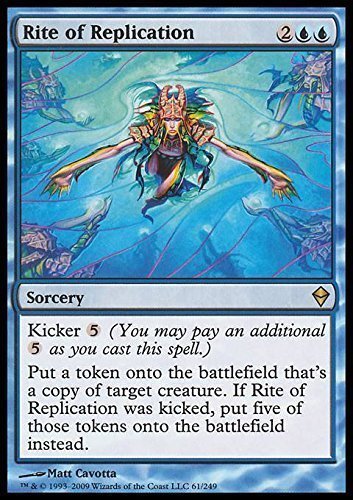 Rite of Replication is part of an infamous combo we included in our list of the best MTG Commander combos. Take a look at the card text, and you can see how it could be used to easily break another card.

With Rite of replication, you can copy another creature on the battlefield. If you pay its kicker cost, you get to copy that creature five times. There are numerous creatures you could copy that would totally change the balance of the game.

One fun example is Gray Merchant of Asphodel. This card drains life from your opponents and lets you gain life equal the amount that was drained. Creating five of them could easily finish the game. 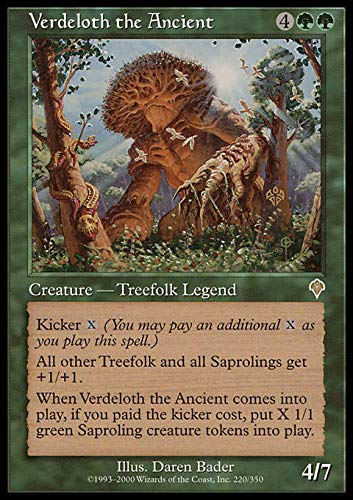 Saproling tokens, while not the most common strategy out there, can still be pretty strong – especially if you’re able to make enough of them to send largely unblockable waves at enemies. Verdeloth the Ancient can help you with that.

Its kicker cost has X in it, which means you can pay as much as you want to. We recommend putting as much mana as possible into this kicker cost, because it will produce a number of saproling tokens equal to the amount of mana you pour into that X value.

It gets better from there. Verdeloth also buffs all your saprolings with +1/+1, so your army of saprolings will be twice as strong. Plus, with green being the best color at ramping in the game, you should be able to have more than enough mana to pump into that kicker cost. 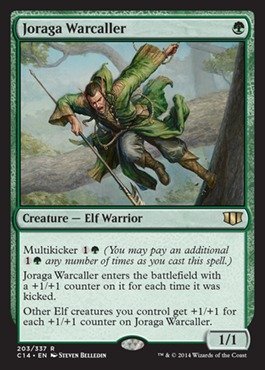 If you’re building an elf tribal deck, we can’t recommend Joraga Warcaller enough. You don’t even need to have a lot of mana open to make it effective, because it only costs one green to cast it initially.

After that, it has multikicker. That means you can pay its kicker cost as many times as you want, and each time you kick it, Joraga Warcaller gets a +1/+1 counter.

Not impressive? Don’t worry, because there’s more. For every +1/+1 counter on Joraga Warcaller, all other elves you have also get +1/+1 counters. You can have a pretty intimidating army of elves in no time.

For some more ideas of potential Commanders to use in an elf tribal EDH deck, consider checking out our list of the best elf Commanders in MTG. 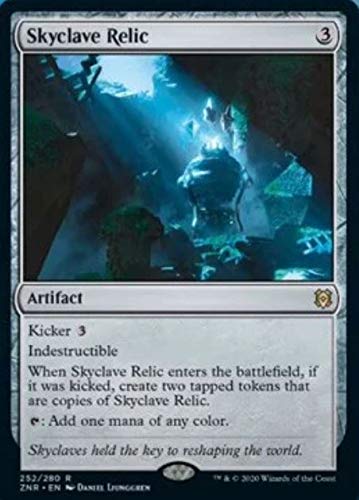 How often have you found yourself in a situation where you didn’t have access to the right mana colors? If this is something that has happened to you frequently, you can help mend the issue with Skyclave Relic. 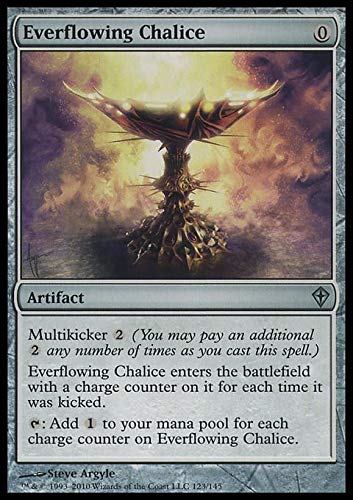 Everflowing Chalice is a mana rock that is, in some ways, better than Skyclave Relic. For example, it costs zero mana to cast it initially. However, you’ll need to pay two mana to kick it – and since it has multikicker, we suggest kicking it as many times as you can afford.

This is because, once it’s out, it will get a counter for each time you kicked it. You can tap it to get one generic mana for every counter it has.

The problem is the mana it produces isn’t a specific color. It cannot be used to pay for any mana cost requiring a certain color, then. However, you can use it to pay the generic costs included in many spells, or to pay for other artifacts. So, while it may possibly produce more mana than Skyclave Relic, you are limited in what you can use that mana for. 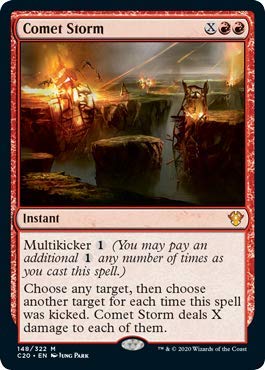 Looking for a way to eliminate specific permanents or players? Comet Storm may be the end of your search, and there are a few points of interest, so let’s get started looking at it.

First, consider its mana cost. There’s an X in the value, so you can pay two red mana and then however much of any color you want on top of that. This is important for the next part: its kicker cost.

It costs one mana to kick Comet Storm, and because it has multikicker, you can pay this cost as many times as you want. You can choose a new target for the spell for each time you kick it; if you pay the kicker cost twice, for example, you can hit two targets with it.

Comet Storm will then do X damage – depending on how much you paid into X to cast it – to every target you choose. The best thing is that it says target. It doesn’t specify whether that target needs to be a creature, player, or planeswalker, so you can technically target all of the above. 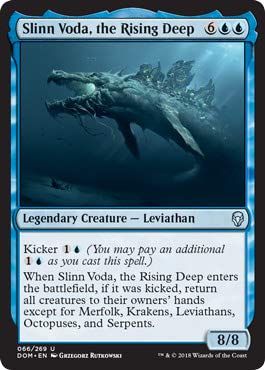 Sea monster decks have gotten increasingly popular over the years. These are decks that use creature types involved with oceans, such as merfolk and leviathans.

Slinn Voda, the Rising Deep offers you some much-needed support if you’re going to make a sea creature deck of your own. Not only is it a massive monster to attack or block with, but it will bounce all creatures that aren’t merfolk, krakens, leviathans, octopuses, or serpents back into the hands of their controllers if you pay its kicker cost.

Put simply, it’s kind of like a temporary board wipe. Sure, your opponents will be able to cast those creatures again, but for the time being, it will give you some reprieve if everyone else has an overwhelming board presence. 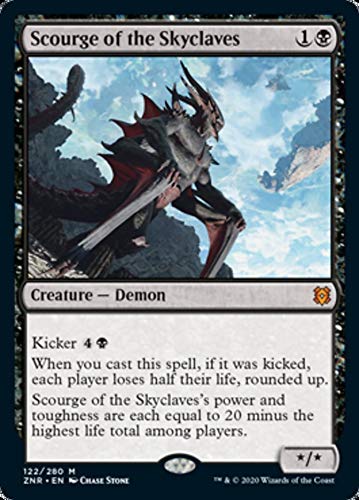 What if, with one card, you could almost completely eliminate other players from the game? Scourge of the Skyclaves makes that entirely possible.

Scourge of the Skyclaves is obviously more effective the lower everyone’s life totals are if you care about having a creature with a high power and toughness. On the other hand, you could just as easily use it at when life totals are still high to really devastate other players and put pressure on them. 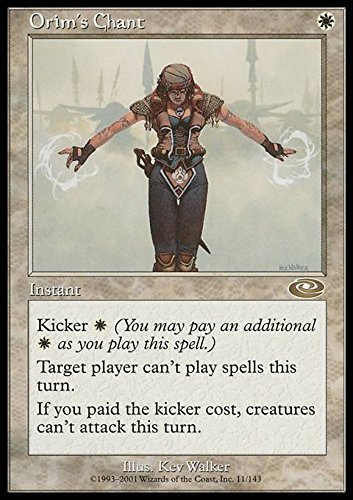 Using Orim’s Chant, you can totally shut down one player for an entire turn. Even if you don’t kick it at all, the ability to prevent one person from playing any spells can shut down combos before they even have a chance to happen.

Kicking it, however, ups the ante. It prevents anyone from attacking with creatures for that turn, so you could use it as a last resort to protect yourself from someone else’s army.

At the end of the day, Orim’s Chant is great for buying you a little more time when you need it. 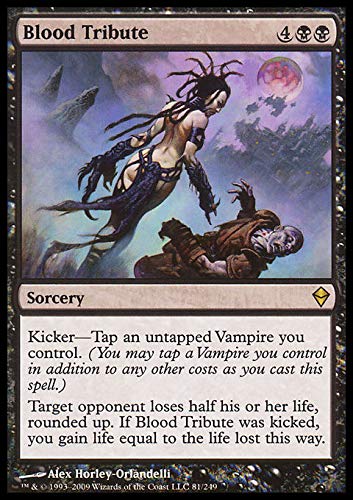 Blood Tribute is different from all the other kicker cards on this list. It doesn’t require you to pay its kicker cost with mana – instead, you simply tap an untapped vampire you have out on the battlefield. If you’re playing a deck that makes vampire tokens, that’s not a problem.

Once you pay the kicker cost, you can choose an opponent to lose half their life points. You, on the other hand, gain life equal to the amount of life points your opponent loses. It’s like a one-sided Scourge of the Skyclaves, with the added benefit of gaining you life.

The drawback is that it’s narrow in its uses. You can’t even kick it at all unless you’re playing a deck with vampires in it.

Can you reduce kicker costs?

There are many cards out there that can reduce the cost of your own spells. Some, like Omniscience, can even make your spells free.

This leaves many with a confusing question: can you reduce the kicker cost of a card? Unfortunately, the answer is confusing, and has a lot to do with semantics.

If you have a card that reduces the casting cost of applicable spells by one, then, that fictional kicker card we described above would cost you two. This doesn’t directly target the kicker cost – rather, it targets the initial casting cost, so it’s like skimming off the top.

Now, if you have something that completely eliminates casting costs, such as the aforementioned Omniscience, that still doesn’t apply to kicker and multikicker costs. It will cover the casting cost at the top of the card, but not any of the kicker costs.

Can you pay a kicker cost from the graveyard?

No. Kicker costs can only be paid at the time of casting the card. Unless you have a card that allows you to actually cast from your graveyard – and not just put something on the battlefield – you cannot pay a kicker cost for a card in your graveyard.

Kicker is an interesting mechanic. It allows you to really up the ante when you’re casting cards, making them even more potent if you have the mana to pay for it.

Hexproof is another mechanic we like. You can learn more about it in our list of the best MTG cards with hexproof.