Act of Treason is a powerful and tricky card that gives you control of an opponent’s creature, as well as to untap it and give it haste. Here are 5 MTG cards like Act of Treason that you should have in your deck! 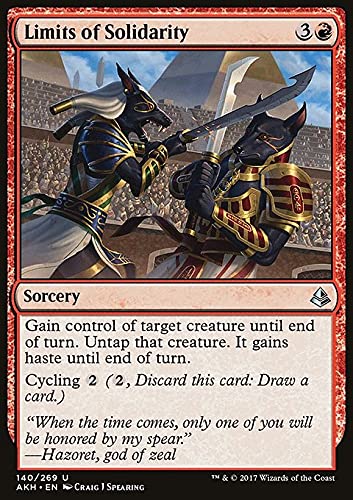 Limits of Solidarity is the first card up on our list of MTG cards like Act of Treason. It’s an uncommon red Sorcery card that allows you to gain control of an enemy creature for the turn.

The card also grants the creature Haste until the end of your turn.

If you ask us, Limits of Solidarity is hands-down the closest card there is to Act of Treason. 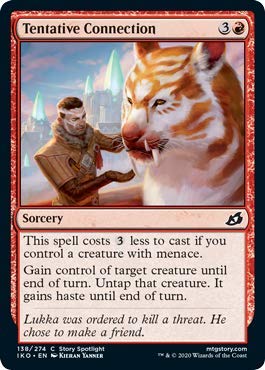 Tentative Connection is the second card on our list, a red Sorcery MTG card like Act of Treason, in that it allows you to take control of a target creature and give it haste for the turn.

The card has a casting cost of 3 colorless and 1 red mana. But, if you control a creature with menace, the card costs 3 less mana to cast.

All things considered, Tentative Connection is a very similar card to Act of Treason. 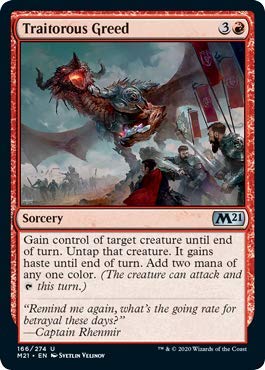 The third card on our list of MTG cards like Act of Treason is the uncommon red Sorcery card, Traitorous Greed.

This card allows you to untap, gain control, and grant Haste to a target creature until the end of the turn.

The card is as close to Act of Treason as they come, giving you the same abilities to control, untap, and Hasten a creature for a single turn. 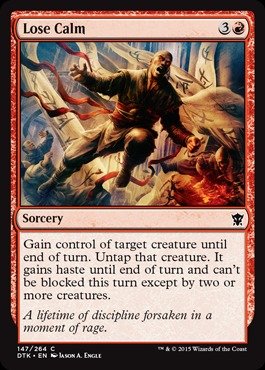 Lose Calm is another red-school MTG card like Act of Treason. Like most of the other similar cards, it has a casting cost of 3 colorless and 1 red mana.

When you play Lose Calm, you gain control of a creature of your choice and untap the creature. The creature has Haste, and you control it for the rest of your turn.

A cool little perk that separates this one from other MTG cards like Act of Treason is the additional benefit that it can’t be blocked except by two or more creatures. 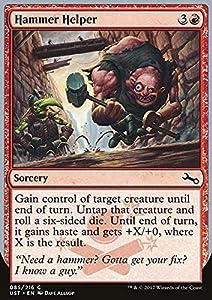 Last but far from least on our list of cards in MTG that are similar to Act of Treason is the red Sorcery card Hammer Helper.

The card has a semi-affordable casting cost of 3 colorless mana and 1 mountain. When the Sorcery is cast, you gain control of a target creature until the end of turn just like with Act of Treason and the other cards on this list.

However, you roll a six-sided die afterward. The creature receives +X/+0, where X is the result of your rolling of the die.

In a way, we saved the best for last this time!

Common Questions About MTG Cards Like Act of Treason

What Does the MTG Card Act of Treason Do?

Act of Treason is a MTG Sorcery card that allows you to gain control of a target creature until the end of your turn. It also grants you the ability to untap it with Haste. The card’s mana cost is 2 colorless and 1 red mana.

Are Pseudo-Act of Treason Cards Worth It?

Pseudo-Act of Treason cards are worth it if you are the sort of player that likes cranking up the number of possible attacks on your opponents by any means necessary. These types of cards allow you to either untap a creature or grant a creature with haste.

How Many Cards Like Act of Treason Are There In MTG?

There are numerous cards that are similar, but, there are only a few cards that are remotely as useful. Most MTG cards like Act of Treason either untap a creature or give it haste, not both.