Home » MTG » MTG Cards Like Anger – 10 Cards for Your Graveyard

Cards like Anger in MTG are quite tricky for opponents to deal with, as they become their most powerful once they are put into a graveyard. Read on below and discover some of the best cards like MTG Anger! 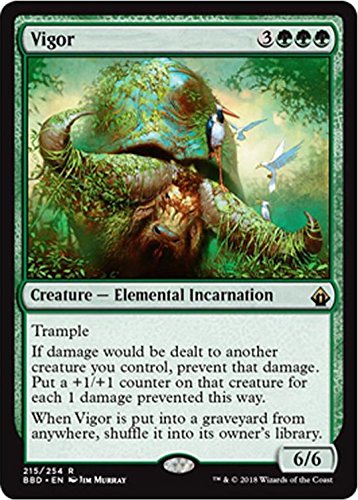 Vigor is a green creature Elemental Incarnation (similar to Anger) card with rare classification. The mana cost to cast the card is 3 colorless and 3 green lands.

Vigor comes into play with 6 power and 6 toughness as well as Trample.

When Vigor is on the battlefield, you may prevent damage to your creatures. If you do prevent damage, put a +1/+1 counter onto the creature for every point of damage prevented.

Even better, when Vigor goes to the graveyard? You get to shuffle it back into your deck! 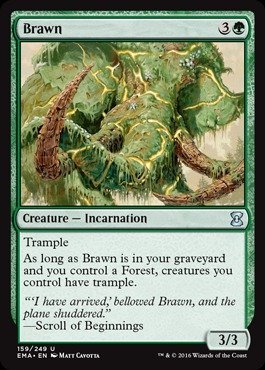 The second card on our list, Brawn, is also a green creature Incarnation, an uncommon Incarnation with a power of 3 and a toughness of 3 as well.

The cost to cast Brawn is 3 colorless and 1 green mana. It comes into play with Trample.

When Brawn goes to the graveyard, and stays there, as long as you have a Forest on the battlefield you other creatures all have Trample.

Pretty sick right? We thought so too! 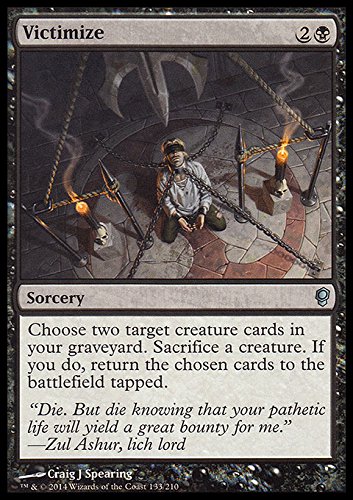 Victimize is the third card on our list of MTG cards like Anger. This one however, is a bit different than most of our top picks.

An uncommon sorcery card of the black school, this card costs 2 colorless and 1 swamp mana to cast.

When you play Victimize, you may choose two creatures from your graveyard. If you do, both creatures come onto the battlefield tapped.

The downside? You must sacrifice a creature as an additional cost to cast this card.

Wonder is the first blue card on our list, a 2/2 Incarnation creature of uncommon status.

The card has flying and costs 3 colorless and 1 blue mana to cast.

When Wonder is in the graveyard, and you have at least one island on the field, all of your creatures have flying. 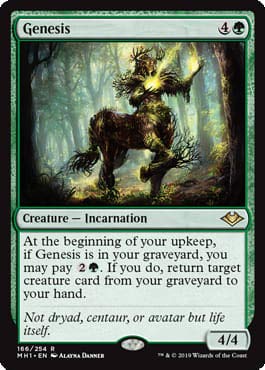 Fifth on our list, and the third green card out of our top picks for MTG cards like Anger, is Genesis.

A rare Incarnation creature, Genesis has a power of 4 and a toughness of 4 as well. Its casting cost is 4 colorless and 1 green mana.

At the beginning of your turn, if Genesis is in the graveyard, you can pay 2 colorless and 1 green mana to return the card to your hand. 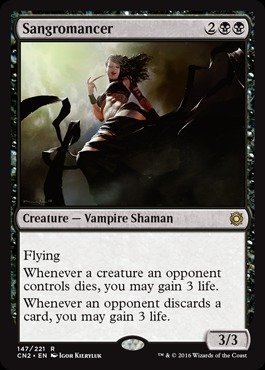 Songomancer is the second black card on our list, and it is also a bit different than the rest of MTG cards like Anger. It has a casting cost of 2 colorless and 2 black mana.

A Vampire Shaman creature of rare status, Sangomancer has flying and both 3 power and toughness.

What makes it like Anger and other Incarnation abilities? Whenever an opponent’s creature dies, or an opponent discards a card, you get to gain 3 life.

The card comes into play with 6 power and 6 toughness. It can not be blocked by opponents unless they use three or more creatures.

A unique ability, whenever a spell or ability you play would counter a spell, instead, exile it and play it for no mana cost.

The best part? Whenever Guile would otherwise go into a graveyard (from anywhere), you get to shuffle the back card into your deck instead. 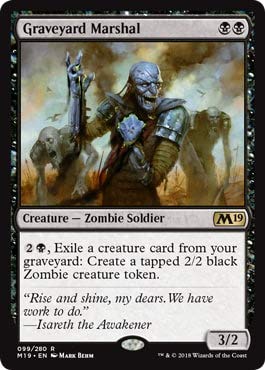 The card comes onto the battlefield with 3 power and 2 toughness.

The best part about Graveyard Master is its activated ability: for 2 colorless and 1 black mana you may exile any creature card from your graveyard.

If you exile a card from your graveyard with this ability, you may put a black Zombie creature with 2 power and 2 toughness onto the field tapped. 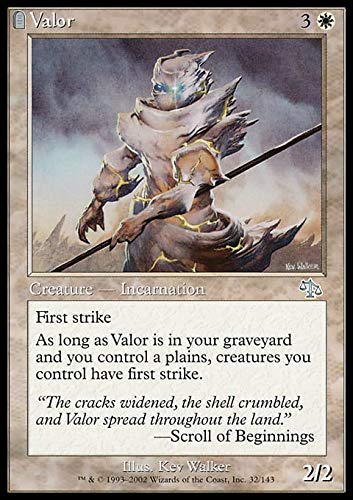 Valor is an uncommon white Incarnation creature with 2 power and 2 toughness. The card costs 3 colorless and 1 white mana to cast.

When Valor hits the field, it has First Strike.

Further, as long as the card is in your graveyard, and you have at least one plains land on the battlefield, your creatures all have First Strike as well.

The last card on our list of cards like MTG anger is also the only artifact to make our top 10 picks, Graveyard Shovel.

When you activate Graveyard Shovel’s ability you must also tap the card. If you do, you may force a target player to exile a card from their graveyard.

If they exile a creature card, you gain 2 life.

What is Anger in MTG?

Anger is an uncommon red  MTG creature card. As long as Anger is in your graveyard, and you also control 1 red land, all of your creatures have Haste. Anger, and most MTG cards like Anger belong to a class of cards known as “Incarnation”. Incarnation refers to abilities that become active only once the card has “died” and has gone to the graveyard.

How Do Anger-Like Cards Work?

How Do You Win at MTG with Cards Like Anger?

Cards like MTG Anger aren’t necessarily going to win the game for you (not by themselves, anyway). What they can and will do, however, is help you beef up or otherwise boost your creatures with extra abilities that make them deadlier. Make sure that your cards like Anger are put into your graveyard from play though, or else their abilities won’t be active.