Ashnod’s Altar is an MTG card that allows you to squeeze extra mana out of the battlefield. These MTG cards like Ashnod’s Altar are our top 5 picks. 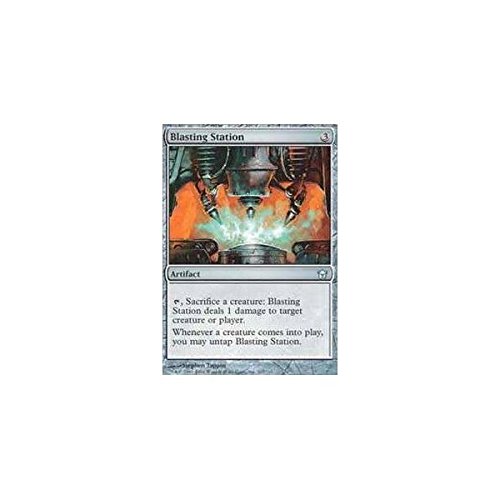 The first card on our list of MTG cards like Ashnod’s Altar is the Blasting Station, an uncommon Artifact with a casting cost of 3 colorless mana.

When Blasting Station is on the battlefield, you may tap it and sacrifice a creature at any given time and have the card deal 1 damage point to a target creature or player.

Also, whenever a creature comes onto the battlefield while this card is in play, you may untap it. 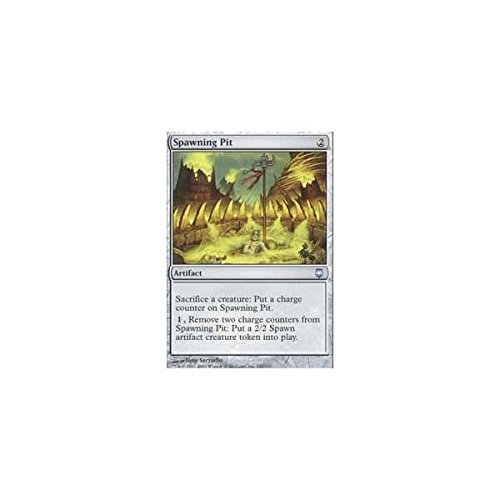 Spawning Pit is another artifact card that allows you to sacrifice a creature for an activated ability to trigger. It has a casting cost of 2 colorless mana.

Pay 1 colorless mana, remove two charge counters from it, and put a 2/2 Spawn artifact creature token onto the battlefield under your command. 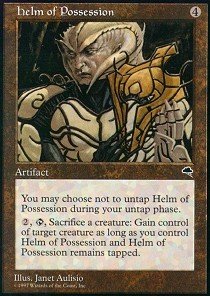 The Helm of Possession is a common artifact card (notice a pattern? Most pseudo-Ashnod’s Altar are all artifacts!) with a casting cost of 4 colorless mana.

You can leave the card tapped, once tapped, or untap during your next step as usual.

Pay 2 colorless mana and tap the card, as well as sacrifice a creature (of course), and you gain control of an enemy creature as long as you still control Helm of Possession.

The catch is that the card must stay tapped. Once untapped, the creature returns to the control of its rightful owner. 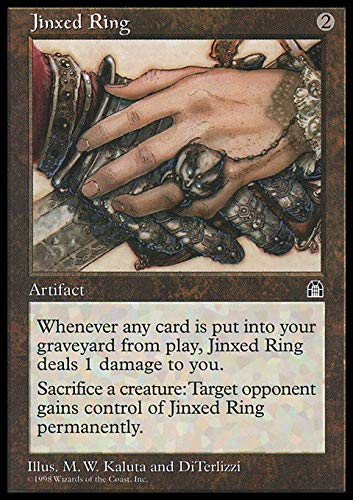 Jinxed Ring is the fourth card on our list of MTG cards like Ashnod’s Altar. It is another artifact card, this one with a low mana cost of 2 colorless mana.

When any card is put into your graveyard from play, the card deals 1 damage point to you.

You may sacrifice a creature at any time and a target opponent gains control of Jinxed Ring permanently.

Talk about a token of your appreciation! Your opponents will love it. 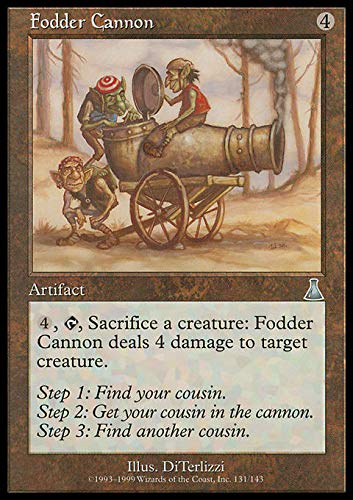 The fifth and final card on our list of Ashnod’s Altar-like cards is Fodder Cannon. An uncommon artifact, the card has a casting cost of 4 colorless mana.

You may pay 4 colorless mana and tap the card, as well as sacrifice a creature, and fodder cannon deals 4 damage to any target.

The idea behind this card is simple: load your creatures into the canon one by one each turn and deal more damage to your enemy than they would be worth on the battlefield.

The card is also a great way to turn a 1/1 peon creature into quadruple the amount of damage, or doubling the damage of a 2/2.

How Does Ashnod’s Altar Work?

Ashnod’s Altar is an Artifact card of uncommon classification. You may sacrifice a creature and add two colorless mana to your pool for the remainder of the turn as long as the artifact is in play. Decks that have regeneration, or return to hand from graveyard cards, go well with Ashnod’s Altar.

Are Psuedo-Ashnod’s Altar Cards Worth It?

If you enjoy mana ramp style decks, or simply being able to summon extra mana seemingly out of nowhere (to frustrate your opponents and surprise them with spells), pseudo-Ashnod’s Altar cards are indeed worth it.

Are MTG Cards Like Ashnod’s Altar Good For Mana Ramp?

Pseudo-Ashnod’s Altar and MTG cards like it are among the best cards to stack into a mana ramp deck. Every card like Ashnod’s Altar at the very least helps boost your mana temporarily, if not allows you to do so each turn.