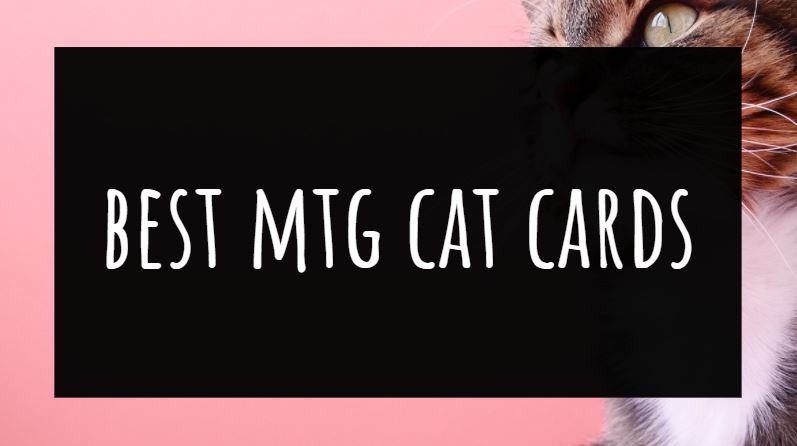 You’ve probably heard someone ask the question, “are you a cat or a dog person?” If you’re a Magic: the Gathering player and you identify as a cat person, then you’ll be pleased to know that you can display this love in your next deck.

Following a deck theme that centers around using cards from a specific creature type is called building a tribal deck. Cats comprise one numerous and unique tribe that can be a blast to build a deck around.

If you’re planning on building a cat deck, we’re here to help you. Keep reading to see a list of the best MTG cat cards currently in existence.

Use These Links to Navigate this Guide >>
What are Cats in MTG?
Best MTG Cat Cards
MTG Cat Questions
Wrap Up

What are Cats in MTG?

The first question to answer is, “what are cats?” Not in the real sense of the word – you should already know what cats are. By asking this question, we’re looking to define what cats are in the universe of Magic: the Gathering.

In MTG, cats are defined as most feline creatures. This can include adorable, fluffy creatures like the ones you might find in your home or in the wild.

However, this can often also include anthropomorphic cat people as intelligent as humans called the cat warriors, leonin, nishoba, or raskshasa. If you’d like to learn more about these cat people, you can check out the MTG wiki’s cat page.

As a tribe in the game, cats can be fun. They’re generally excellent at buffing each other with +1/+1 counters, but they cover a range of strategies in the game. 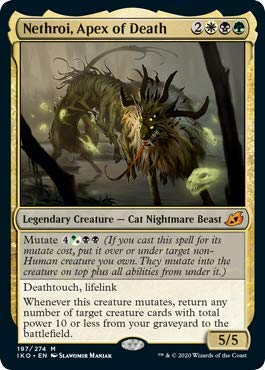 It may not look like a cat at first, but Nethroi, Apex of Death is classed as a “cat nightmare beast,” so we’re including it on our list. As a bonus, this card is available in a Godzilla-themed alternate art version based on Biollante.

Netrhoi makes a seriously amazing Commander. It would make a solid creature on its own if it just had deathtouch and lifelink – two key words that make it a formidable opponent on the battlefield.

But for four generic mana, one white or green mana, and two black mana, you can mutate it. When you do, you get to bring back any number of creature cards from your graveyard to your battlefield.

The stipulation is that they must have a total power of ten or less, which isn’t really an issue. There are tons of powerful cards you can bring back from the graveyard with this restriction in mind. 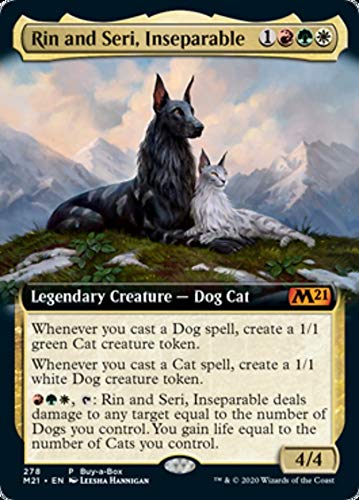 Who wouldn’t like the idea of a cat and dog being the best of friends? Rin and Seri, Inseparable, represents just that: a cat and dog prepared to defend each other in battle.

This is another great Commander to consider. If you think of yourself as someone who loves cats and dogs equally, Rin and Seri is the card for you. It’s a hybrid cat/dog Commander that encourages you to use both types of cards in your deck.

The card will allow you to generate cat and dog tokens as you cast cat and dog spells. Once you’ve amassed a large cat/dog army, pay one red, green, and white mana to deal the same amount of damage as dogs in your control to any target. Then you gain life points for each cat you control.

It’s no wonder this one has become a fan favorite.

Arahbo, Roar of the World is yet another cat clearly designed to be a Commander. In fact, it came from a prebuilt 2017 Commander deck called

Normally, Commanders can’t really use their abilities in the command zone. The keyword there is “normally,” because Arahbo’s Eminence ability basically emanates from the command zone. It allows Arahbo to give another cat you control +3/+3 until the end of your turn, which is perfect for buffing a cat to attack or block with.

Once you cast Arahbo, it gets even better. You can then pay mana to double a cat’s power, add the amount of its power to its toughness, and give it trample.

Marisi, Breaker of the Coil 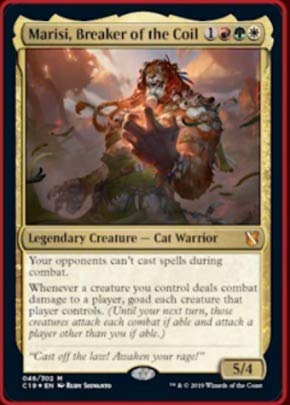 There are a couple things that make Marisi, Breaker of the Coil overwhelmingly strong. One is its first ability, which is incredibly controlling. It stops any of your opponents from casting spells during combat, which means they can’t play spells to prevent damage, destroy a creature, or buff their own creatures as a last-ditch effort against you in combat.

Second, its other ability causes all of an opponent’s creatures to become goaded whenever a creature you control pierces their defenses and does combat damage to that player. Goading is a key word that means said creature must attack on the next turn if able, and they cannot attack the person that goaded it.

Basically, it means the opponent is forced to risk losing some of their creatures and potentially angering another one of your opponents by attacking them. It’s like weeding out the competition for you.

Mirri, Weatherlight Duelist is the perfect Commander for you if you’re going to build a heavily combat-focused deck with tons of creatures. Those creatures don’t even necessarily need to be cats with Mirri, as she doesn’t personally do anything to benefit cats specifically.

However, she does benefit your creatures overall. Every time she attacks, she makes it so opponents can only block with one creature. Since most creatures can only block one other attacking creature, this means that you’re pretty much guaranteed to get through and do combat damage to your opponent if you attack them with more than one creature.

Mirri also benefits you defensively. While she’s tapped, your opponents can only attack you with one creature. Since you’ll likely be attacking with her as often as possible, this means she’ll generally be tapped, preventing enemies from swinging at you with armies of creatures.

Related Post: MTG: How Does Blocking Work? (A Beginner’s Guide to Combat) 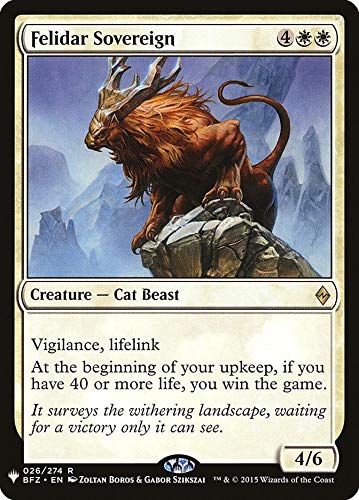 It isn’t exactly the most powerful cat card in the game, but Felidar Sovereign is still noteworthy enough to deserve mention. Any of its abilities make it a decent addition to your deck.

For example, with just vigilance and lifelink, Felidar Sovereign is a solid beater card that you can attack your opponents with. It won’t tap after you attack, and it will help you gain life. There’s nothing wrong with that.

It’s the second ability that matters most, though. Felidar Sovereign also states that you will win the game if you have 40 or more life at the beginning of your upkeep. In Commander, you start with 40 life, so you could win immediately if you’re able to cheat Felidar Sovereign out right away.

Lurrus of the Dream-Den 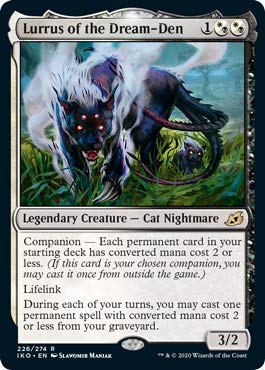 When it was released, Lurrus of the Dream-Den almost immediately forced Wizards of the Coast to revise the rules for casting a companion. The reason was that this card was simply too powerful, and it was all too easy to put it in your deck and cast it quickly.

In a nutshell, Lurrus turns your graveyard into a second library. Provided the permanent spells in your library cost two or less converted mana, you can cast one each turn from your graveyard as if it were a normal card in your hand.

If you think having to limit all your permanent spells to two mana or less is an impossible limitation, you’d be wrong. There are plenty of powerful spells that cost two or less converted mana, so you’ll have tons of options.

You’ve seen a lot of strange cat combinations on this list. With Wasitora, Nekoru Queen, now you’re seeing a cat combined with a dragon. If you want to learn more about her, we suggest reading about her background a little.

She’s an all-around solid card. First, she has flying and trample, which both make her a fearsome creature to face in combat.

Should your opponents fail to block her, she’ll force them to sacrifice one of their creatures, thinning their forces for you. And if they have nothing to sacrifice, she’ll generate a 3/3 cat dragon token with flying. A 3/3 creature isn’t anything to laugh at, and Wasitora will help you build up a small army of cat dragons quickly. 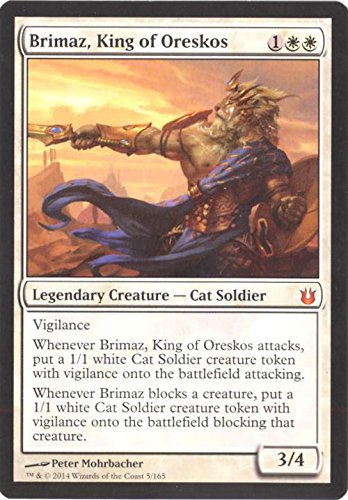 The abilities for Brimaz, King of Oreskos, are incredibly fitting, considering that he’s a king. Like a king, he essentially has bodyguards, and that’s what his abilities represent.

In short, you’ll always get one extra creature whenever you attack with Brimaz. When he blocks, you’ll never need to worry about him taking combat damage, since he’ll create another token to do the blocking for him.

There’s a compelling reason behind the higher price that tends to be associated with this cat. White as a color has a fatal flaw in MTG: it often lacks card draw and can’t ramp into mana quickly.

Alms Collector helps repair at least one of those issues. He allows you to draw a card whenever an opponent would draw two or more. Getting to draw cards is almost never a bad thing, and in white, a color that sorely needs card drawing abilities, Alms Collector is a coveted card.

Want to learn more about each color’s strengths? Read our post about MTG names for color combinations.

What is the best cat Commander in MTG?

Are you trying to decide which Commander to put in charge of your next Commander deck? If you’re looking at cats, there are plenty of options. We even included several viable choices on this list.

That being said, the best cat Commander will depend on what you’re looking for. is great for when you want to build a cat tribal deck because he will periodically buff your cats, empowering you to attack with them.

Nethroi, Apex of Death is an extremely powerful card that would be an excellent choice for when you want to interact with your graveyard. It will allow you to bring creature cards back from the graveyard every time it mutates. Make sure you pack your Commander deck with tons of creatures that have fun abilities, so that Nethroi can gain them when it mutates.

Rin and Seri, Inseparable is also a popular cat commander. It’s not strictly a cat – it’s also a dog – but in terms of flavor, it’s an adorable card that just happens to make tons of tokens for you.

If you’re building a cat-themed deck or simply want to incorporate some cat cards in your next deck, you have plenty of choices to choose from. Hopefully, we’ve helped you narrow down your list a little bit in the event you were overwhelmed by the decisions.

Don’t forget to think about including some board wipes in your deck, too. We’ve got you covered in this regard. Be sure to read our list of the best MTG Commander board wipes.