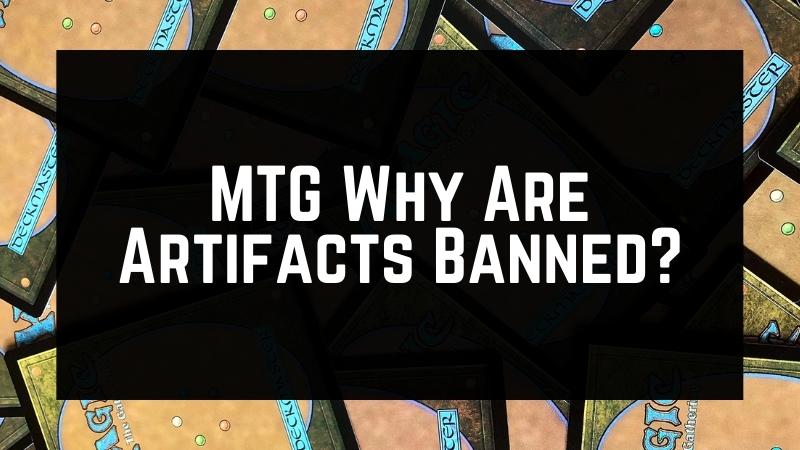 If you’ve ever wondered why so many artifacts get banned, read on below. We discuss the answers to why MTG artifacts are banned and other related questions with answers.

MTG Why Are Artifacts Banned?

There are several reasons for MTG artifact cards getting banned or restricted. The most common reason for artifacts becoming banned is if they are simply too powerful or give too much of an advantage. The aim of banning artifacts is to keep the overall MTG experience a fun and fair one.

Learn more about Chrome Mox on the official Wizards of the Coast card database, Gatherer.

You can see straigt away that Chrome Mox is an incredibly powerful card. It costs nothing to cast, and is a mythic rare Artifact with Imprint. The card acts as a mana source of the color you choose when it enters the battlefield.

Chrome Mox is a perfect example of why the Mox cards are banned in MTG, they create an unfair advantage for one player, creating an entirely unbalanced game.

Are All Artifact Cards in MTG Restricted or Banned ?

What Does Affinity Have to Do With MTG Artifact Cards Being Banned?

Why Were Artifact Land Cards Restricted of Banned in MTG?

Many artifact lands are now banned in modern MTG. That’s because they make the game somewhat unfair for those who don’t have access to them. That said, they’ve been banned from competitive play for years. Artifact lands were first banned back during the Mirrodin expansion.

Artifact lands are not considered basic lands. Rather, they are classified as non-basic lands. That means a player may control up to a maximum of 4 copies of the same special land. It is more than likely a fact that contributed to them becoming banned from competitive play years ago.

How Do You Know What MTG Artifacts Are Restricted or Banned?

Keeping up with artifacts that have been added to the ban list isn’t as complicated as it may seem, especially if you are an active player. If you’re playing Friday Night Magic or competing in official tournaments, the hosts are obligated to make sure everyone is up to speed on what cards are legal and what ones are banned.

The best place to check if an artifact, or another card for that matter, is banned, is the official BANNED AND RESTRICTED list put out and maintained by Wizards of the Coast themselves.

How Often Are Artifacts Restricted or Banned?

The list of banned MTG cards is updated by the makers of the game regularly. That means cards may become banned at any time, technically speaking. That’s why it’s important to check in with Magic card dealers, judges, and the BANNED AND RESTRICTED list before building your next competitive deck.

What Are the Best Banned Artifacts?

Chrome Mox, Arcum’s Astrolabe, and Birthing Pod are among the best modern artifacts that are currently banned in MTG. Skull Clamp, Mox Opal, and Krak-Clan Ironworks are a few more of the best banned artifacts, in regards to the most recent ban-list.