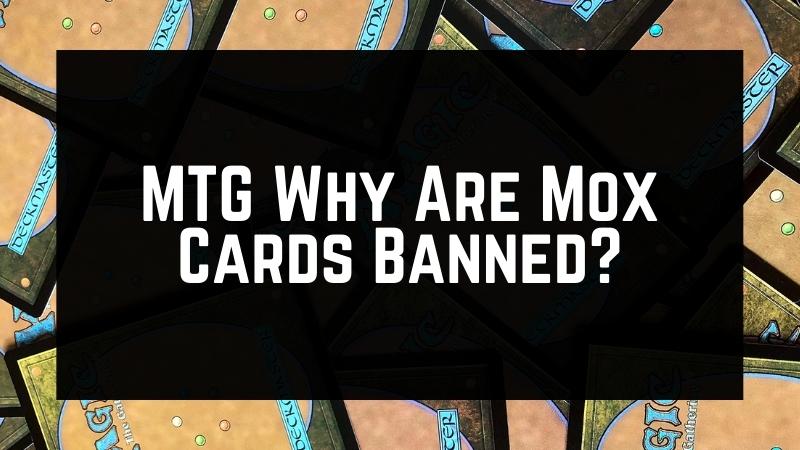 If you’re an old-school MTG player with a pension for powerful cards from the glory days, or a new player learning the history of MTG, you may ask yourself “why are Mox cards banned?”

Read on below, learn the answer of why Mox cards aren’t legal. Even more, take at look at several additional related questions and answers!

MTG Why Are Mox Cards Banned?

The Mox cards are banned in MTG because they create such a fast and powerful increase in mana for one player that the game becomes unbalanced when they are in play. The extremely quick mana acceleration that they provide is more or less god-like in the most recent versions of the game. Mox cards are likely to remain banned indefinitely.

Learn more about Mox Opal on the official Wizards of the Coast card catalogue, MTG Gatherer.

Mox Opal is one of many Mox cards that is currently restricted from sanctioned MTG play. Take a closer look and the reason for its restriction from the game is pretty clear.

Mox Opal is a Legendary Artifact of the mythic rare status (the rarest classification of MTG cards) and had Metalcraft.

Its Metalcraft ability allows you to tap Mox Opal and add one mana of any color you please to your mana pool for the rest of the turn.

The only catch is that you need to control three or more artifacts. But, that’s nothing. As it is an artifact itself, you only need two more in play to use the ability.

And that, folks, is exactly what makes the Mox cards unwelcomed in sanctioned MTG games.

What Exactly Are Mox Cards?

In MTG, Mox is a classification for cards that represent Moxen, or Moxes. Further, Mox are artifacts like talismans, jewelry, and gemstones that produce extra mana by tapping or by activated abilities. The Power of Nine are the most famous of the MTG Mox cards. Most of them are banned from sanctioned play.

How Many Mox Cards Are There?

According to the Wizards of the Coast Magic Gatherer card database, there are 13 Mox cards:

All of these Mox cards are currently ilegal. Even more, the cards will more than likely remain so permanently.

When Were Mox Cards First Banned?

Most of the Mox cards have been banned ever since the first MTG banned cards list appeared from Wizards of the Coast. Further, the latest Mox card to be banned was Mox Opal, added to the banned list back in January of 2020.

What is the Most Powerful Mox Card?

There is no one most powerful Mox card, rather there are five (the Power of Nine cards); Mox Pearl, Mox Sapphire, Mox Jet, Mox Ruby, and Mox Emerald. Any Mox card is incredibly powerful as far as mana ramping/acceleration is concerend. Hence, none of the 13 cards are legal in sanctioned MTG games.