Home » MTG » Planeswalker vs Creature: Which One Wins?

Planeswalker vs Creature is a debate that is pretty much one-sided, with the exception of legendary and mythic rare creatures.

Read on below and explore everything you need to know about Planeswalkers vs creatures.

Planeswalker vs Creature: Which Wins?

In most cases, there is little to debate between which is the better option between a Planeswalker and a creature. The Planeswalker almost always comes out on top.

Planeswalkers are extremely potent cards that can’t even be attacked like creatures. They also have powerful abilities that other cards don’t.

Creatures on the other hand are like sitting ducks on the battlefield. Further, most creatures are disposable, even if they are large and impressive.

Planeswalkers are not disposable. Once you get one into play, you want to keep it there as long as possible.

Creatures may have an ability or two, sometimes even several. But, they never add up to the sorts of abilities that Planeswalkers have.

The bottom line here is that these two card types are very different and that Planeswalkers are far more powerful than creatures. 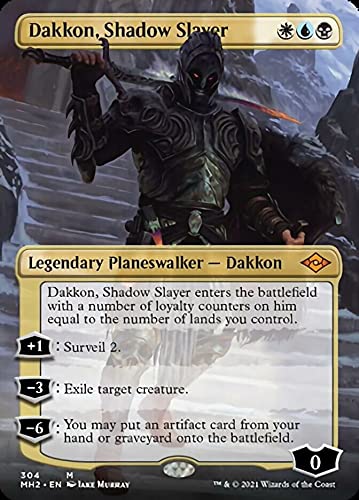 Dakkon, Shadow Slayer is a mythic rare Legendary Planeswalker that enters the battlefield with a number of loyalty counter equal to the number of lands under your control.

His abilities are crucial, especially against creatures; surveil 2, exile target creature, and return an artifact from your hand or graveyard back onto the battlefield.

In regards to the topic of this response post, this card is a prime example as to why Planeswalkers normally win. This one can even target and exile a creature every single turn if the owner chooses to do so.

FAQs About Creatures vs Planeswalkers

Creatures can not attack Planeswalkers unless the Planeswalker has transformed itself into a creature. The exception to this is creatures that have the ability to tap and deal damage to a chosen source of X color, or card type.

Can Planeswalkers be Killed?

Planeswalkers can be exiled, removed from the game, suspended, frozen, and, yes, even killed. When a Planeswalker’s loyalty counters reach zero, it is “dead” and goes to the graveyard of its owner.

Can Creatures Defend Against Planeswalkers?

Creatures aren’t often able to defend against the attacks of Planeswalkers because they are not combat damage attacks, like those from creatures. Planeswalkers typically deal damage directly, as a spell does. They may also destroy or remove creatures from the game by targeting them with an ability.

Generally speaking, most creatures don’t come near stacking up to a Planeswalker.

Hopefully that clears up any questions you had! Thanks for reading!