Home » MTG » Planeswalker vs Gods: Which One Wins?

The Planeswalker vs Gods debate is a serious one. Both cards are extremely powerful and offer diverse solutions to otherwise sticky situations.

Planeswalkers and Gods and two of the most sought-after card types in MTG, but which one is actually better? 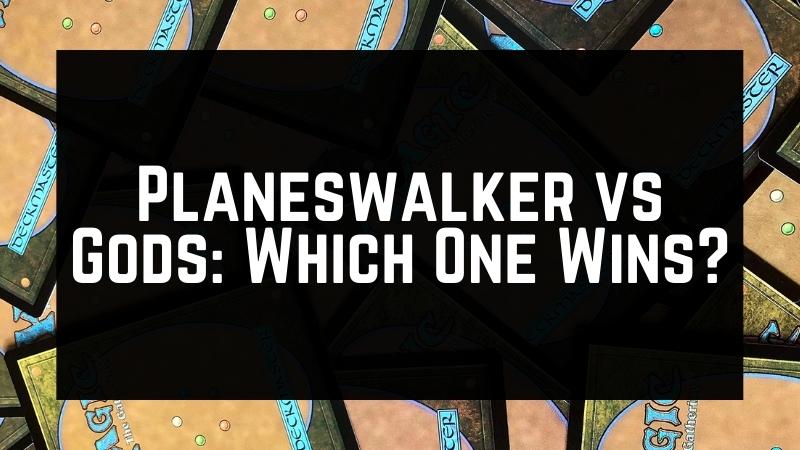 Read on below and discover everything you need to know about these two card types, and which one wins!

Planeswalker vs Gods: Which Wins?

Gods and Planeswalkers are both powerful MTG card types, though one is much stronger than the other.

Planeswalkers are typically mythic rare cards and come with an average of three abilities. The Planeswalker’s abilities are often over-powered in comparison to creatures or the effects of spells.

Gods, on the other hand, are legendary enchantments and not nearly as impressive as most Planeswalkers aside for being Indestructible.

So, which one wins? There is honestly not a black and white answer.

If you are looking for a creature-like card that does major damage on the field, a God is the best way to go.

Otherwise, a Planeswalker card is a much better choice because it does more damage all-around(not just on the battlefield). 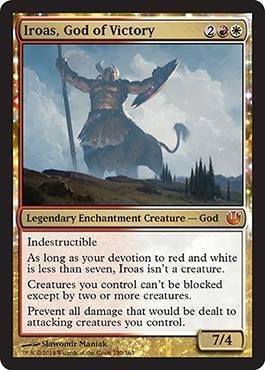 Iroas, God of Victory is a LEgendary Enchantment Creature God of mythic rare status. It is a 7/4 creature type card that is Indestructible right out the gate.

As long as your devotion to white and red stays under 7, the card doesn’t count as a creature. Plus, creatures you control can’t be blocked unless more than one creature blocks them.

The most impressive part about this card though is that it allows you to prevent all damage that would be dealt to all your attacking creatures, every time they attack.

So, as you can see, it is no Planeswalker but it comes as close as it gets!

Gods are legendary enchantments that come with Indestructible and one other ability. Each God has a different ability, making each one equally powerful and unique.

Why Are Planeswalkers So Powerful?

Planeswalkers were meant to be super powerful cards that dominate the game, and that’s exactly what they are. They are so powerful because that is how they were intended to be. Planeswalkers are the single most versatile and powerful card type in MTG, period.

Are Planeswalkers Stronger than Gods?

Planeswalkers are slightly stronger than Gods in a few ways; they can’t be targeted as a creature or spell, they can’t be attacked, and they have far more powerful abilities than Gods.

However, when it comes to leading a charge on the battlefield itself, Gods may tread the only place Planeswalkers can’t actually go, which is the battlefield.

Thanks for reading! Hopefully we answered all of your questions!