Home » MTG » Planeswalker vs Indestructible: Which One Wins?

The Planeswalker vs Indestructible debate rages on for good reason.

So, what’s the scoop on these two? Read on below and find out!

Planeswalker vs Indestructible: Which Wins?

Comparing Planeswalker cards and Indestructible cards is like comparing apples and oranges. One is a card type, the other is a type of ability, or mechanic, that a card may have.

Planeswalkers are cards that are in between rare creatures, enchantments, and players, with very powerful abilities. Indestructible is a specific ability that protects a card from being destroyed, no matter what.

The main time these two types of cards clash is, of course, on the battlefield.

For example, a Planeswalker may use an ability to target and destroy a creature that’s in play on the board. But, if the creature has Indestructible it can’t be destroyed.

In another example, a Planeswalker may use a “remove or exile target card” ability to move a creature from the table. In this case, even if the creature is Indestructible, it won’t keep the card from being exiled or removed. 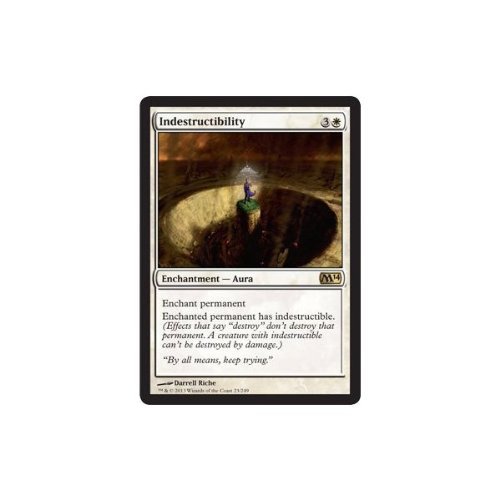 Indestructibility is a classic Enchantment Aura that grants the Indestructible ability to the enchanted permanent card in play that it is attached to. The card is a rare white spell, costs just 4 mana, and goes to show that nearly any card type can be made Indestructible, including Planeswalkers.

That said, this wouldn’t be the best card to try and enchant a Planeswalker with, as they don’t always count as permanents.

FAQs About Indestructible vs Planeswalkers

Is Indestructible Just for Creatures?

Indestructible is not an ability solely reserved for creatures, its also an ability that is seen on Planeswalkers, Lands, Enchantments, Artifacts, and more. More or less, any card is eligible for Indestructible so long as you have the right spell.

How Do You Beat Indestructible?

Winning against Indestructible cards isn’t nearly as hard as it seems. Simply find a way to get around them, freeze them in place, take control of them, or exile/remove them from the game. In any of these scenarios whether or not they are Indestructible doesn’t make a difference, and they become useless indestructible cards at best.

Both Planeswalkers and Indestructible cards are extremely useful. Planeswalkers are diverse and power cards, period, and need no additional explanation as to why they are useful.

Indestructible cards, on the other hand, are incredibly useful as well. Not only do they keep creatures on the field longer, against all odds, but they also prevent rare artifacts enchantments, and other cards from destruction.

Mixing Planeswalkers and Indestructible is also another story. This combo is practically unstoppable.

Thanks for reading! Hopefully your questions have disappeared!