Armageddon is one of my personal favorite MTG cards ever (it is an end-game card if there ever was one). These 5 cards are as good as it gets for MTG cards like Armageddon! 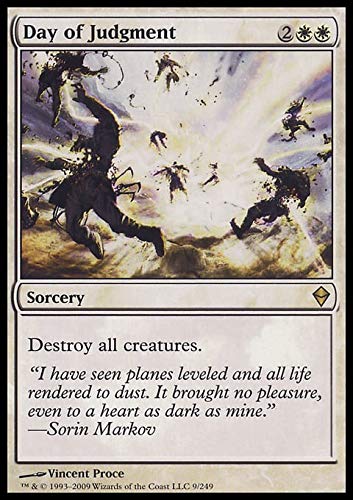 A rare white Sorcery, Day of Judgement costs 2 colorless and 2 white mana to cast. But, boy oh boy is it worth it to see the looks on your opponent’s faces when all their precious hordes of creatures are instantly demolished! 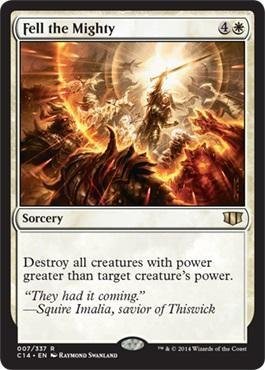 Fell the Mighty is a rare white Sorcery card with a semi-high casting cost of 4 colorless and 1 white mana.

When you play Fell the Mighty, you destroy all creatures that have a power that is greater than the target creature’s power.

If you target a 1/1 or 0/1, all the creatures on the board are destroyed with Fell the Mighty.

Just like Day of Judgement, Fell the Mighty are among the top few MTG cards like Armageddon that should be played directly before Armageddon itself (so you still have the mana to play them!). 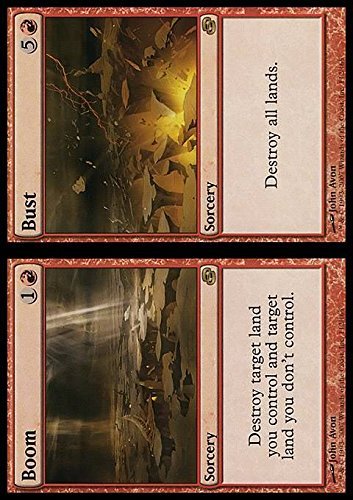 Boom and Bust is a rare red double-Sorcery card. You may only choose one spell when you cast it.

Bust, at a higher casting cost of 5 colorless and 1 red mana, destroys all lands, like Armageddon itself. 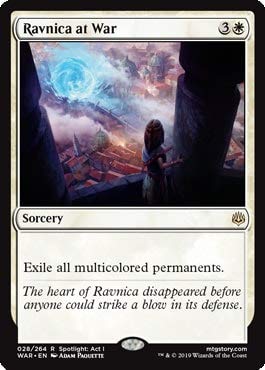 Ravnica at War is another great rare white card that is pretty similar to Armageddon. It is also extremely well-played directly before Armageddon.

The card costs 3 colorless mana and 1 white mana to cast. When played, Ravnica at War allows you to Exile all multicolored permanents presently on the battlefield.

That means equipment, artifacts, and other card types all go bye-bye.

It is very much like Armageddon, but with a twist; cards in exile are not destroyed. They may somehow make it back into play.

When it comes to the lists of the top MTG cards like Armageddon, no list could be complete with a mention of Ravages of War. It may be the most similar of all.

Ravages of War is a rare white Sorcery card, extremely like Armageddon, with a converted mana cost of 4 and the ability to destroy all lands.

When you think about it, it IS the same as Armageddon. Only the names and artwork are different.

What is the MTG Card Armageddon?

Armageddon is a mythic rare white Sorcery card that allows you to destroy all lands currently on the battlefield. The downside is that the lands destroyed with the spell include your own. The spell costs 3 colorless and 1 white mana to cast.

Is Armageddon Really That Good?

In a combination with other powerful AOE-type cards like Pyroclasm, Armageddon is one of the best cards in the game, period. Think about it: casting Armageddon destroys all lands, and Pyroclasm and another spell or two, and all creatures and other permanents are also destroyed… all in one turn if you time things right!

How Do You Win At MTG With Armageddon?

Armageddon is truly an end-game card if used properly. Wait until you have a few creature and mana cards in your hand, and a sorcery or ability that deals X damage to all creatures, and then play Armageddon directly after the other spell or ability (all in one turn). Everything on the board will be destroyed, but you will be ready to rebuild quickly with cheap creatures and plenty of land cards to play.