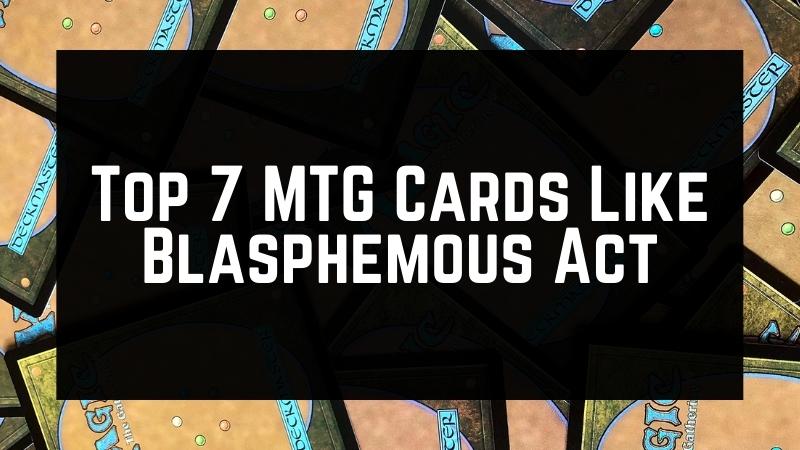 Blasphemous Act is an MTG card that deals an enormous amount of damage to all creatures. Here are our picks for the top 7 MTG cards like Blasphemous Act that you should know about! 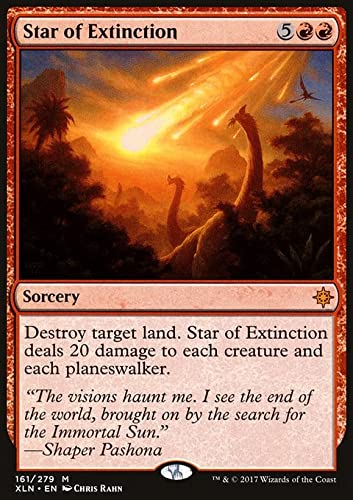 Star of Extinction is the first of many great MTG cards like Blasphemous Act on our list. A mythic rare red sorcery card, it is also the most powerful card on the list.

The card costs 5 colorless and 2 red mana to cast, but, boy oh boy when you do!

When you cast it? Choose a land on the battlefield and destroy it, and deal 20 damage to each creature and planeswalker.

Did we mention that it is one of the only cards MORE powerful than Blasphemous Act on our list? 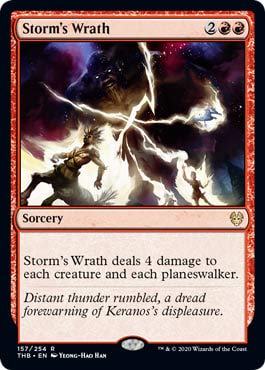 Storm’s Wrath is a rare red Sorcery card that deals 4 damage points to each planeswalker and creature.

Sure, it isn’t 13, or 20, but even a mere 4 points of damage to EACH creature and planeswalker is actually quite impressive (and very helpful and disrupting enemy formations and morale).

The best part is that it has a relatively affordable casting cost for such benefit as it offers. The card costs 2 colorless and 2 red mana to cast. 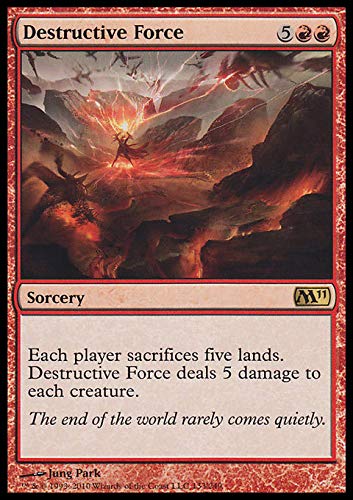 Destructive Force is the third card on our list of MTG cards like Blasphemous Act. It is another rare red Sorcery card.

The card has a semi-high casting cost of 5 colorless and 2 red mana, which is the only real downside to it.

When you play the card, each player must sacrifice 5 lands each. In addition, each player also takes 5 direct damage points from Destructive Force. 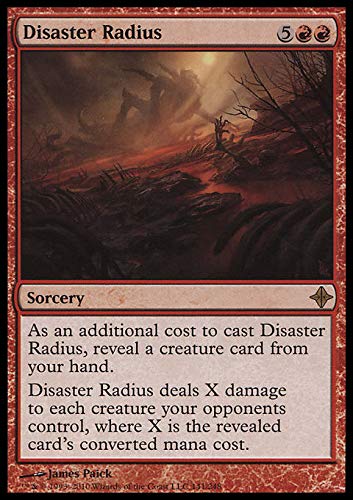 The card has a semi-high cost of 5 colorless and 2 red mana to cast, as well as an additional cost of revealing a creature card from your hand. You can not play this card without a creature in your hand.

Once you reveal the creature from your hand, deal X damage to each creature that your opponents control on the battlefield (where X is the revealed creature card’s converted mana cost).

There is no real downside to this card, except maybe having to reveal a creature and giving your enemies a head’s up about what’s headed their way. 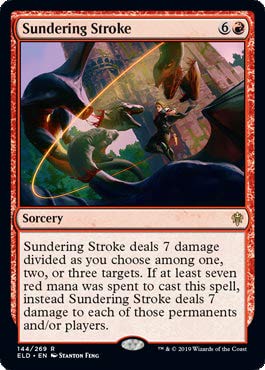 Sundering Stroke is a rare red Sorcery card with an unusually high casting cost of 6 colorless and 1 red mana.

The results of such a steep price? Dealing 7 damage points, divided as you choose, to one, two, or three targets.

The kicker? If all 7 of the CMC spent for this card were red mana, deal 7 damage to each of those creatures instead. 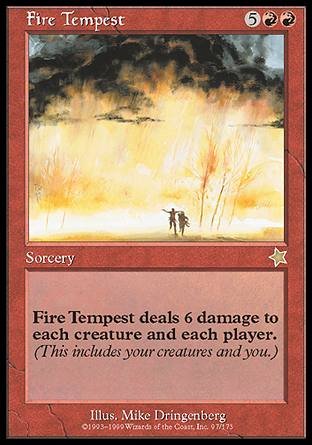 Sixth on our list of MTG cards like Blasphemous Act is Fire Tempest, an old-school rare red Sorcery card (noticing a pattern here?).

The casting cost is equivalent to most of the cards on this list: 5 colorless and 2 red mana, for a CMC of 7.

When you play this Sorcery, Fire Tempest deals 6 damage points to each creature and player in the game.

The drawback, of course, is that you and your creatures also take 6 damage points! Reckless Endeavor is a strong Sorcery card, also red, also, rare, and also with a CMC of 7 (5 colorless and 2 red mana).

When you play this card, roll two 12-sided dice and choose one of them. Deal that much damage to each creature on the battlefield.

The second die’s result yields as many Treasure tokens.

What Is Blasphemous Act in MTG?

Blasphemous Act is a rare red Sorcery, with a high-end casting cost of 8 colorless and 1 red mana. The reason the card is so expensive? It deals a whopping 13 damage to each creature on the board (even yours).

Are Pseudo-Blasphemous Act Cards Worth It?

How To Win At MTG With Blasphemous Act-Like Cards?

The most straightforward way to win a game of MTG with Blasphemous Act and other pseudo-Blasphemous Act cards is to completely annihilate your opponent’s creatures. And, once they are defenseless, crush them with your own creatures (or direct damage Instants and Sorcery cards).