Home » MTG » Which MTG Sets are Legal in Modern?

Perhaps one of the greatest things about Magic: the Gathering is that it can be played in so many different ways.

If you want to play in Modern, however, there are only particular sets you can use cards from. So which MTG sets are legal in Modern?

We’ll give you the full list and more. Here’s what you’ll discover in this guide:

Use These Links to Navigate this Guide >>
What is Modern?
MTG Sets that are Legal in Modern
Banned Cards in Modern
Wrap Up

Modern is a style of Magic in which players use decks they created before the match.

The decks cannot be made from any cards used before Eighth Edition. They also cannot contain any cards from the Modern ban list, which is maintained here.

We will also discuss banned cards in Modern further in greater detail.

Other than limiting the sets you can use and banning some cards, there aren’t a whole lot of rules about how to create your deck. It just needs to have at least 60 cards, and you need to be able to shuffle it by yourself.

You can make decks greater than 60 cards, but that isn’t necessarily recommended.

For one thing, your deck becomes harder to shuffle the larger it is. And for another, the more cards you have, the less likely you are to draw a card you need.

You may also use a sideboard in Modern. A sideboard consists of fifteen cards that aren’t actively used in the deck, but could potentially be switched into the deck between matches.

Last, you cannot have any more than four of one card in a Modern deck. Basic lands are the exception to this rule.

MTG Sets that are Legal in Modern

Because Eighth Edition was a long time ago, and Modern includes every single core set and expansion since then, there are a lot of sets legal in the format.

We’ve included a list of the legal sets below, as well as links to where you can find them. For the most part, we've included links to booster boxes, but some of them, due to rarity of the set, are booster packs instead.

That being said, here is a list of the MTG Sets that are legal in Modern as of January 2020: 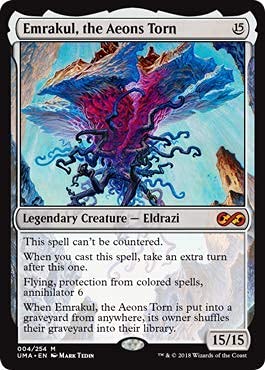 Sometimes, specific cards emerge as too powerful for various formats. This is often due to game-breaking mechanics.

An example of a commonly banned card is Emrakul, the Aeons Torn. Although it is legal in Modern, it is banned in Commander and Duel.

The following cards are those currently banned in Modern as of Janurary 2020:

So should you play Modern?

Like with other formats, the answer is dependent on your play style and personal preferences. If you’re an experienced Magic player familiar with old and new mechanics, Modern could be right up your alley.

It’s also a fun format because you have an extremely wide array of sets to build decks from. Truly, the options are just about endless, and you’ll be able to express your creativity with Modern decks.

However, if you’re new to the game, you might be a little overwhelmed by all the options. This doesn’t mean, though, that you couldn’t still use the format as a way of deepening your Magic knowledge.

Curious about which booster boxes are best to buy to grow your Modern collection? Take a look at our guide on the subject.