Home » MTG » Which MTG Sets have White Borders? (And What Do They Mean?)

Magic: the Gathering has been around long enough that changes have naturally occurred over the course of its decades-long lifespan.

Some of those changes have been aesthetic. This includes alterations to the card borders, which started off as black.

We’ll explore that question and the background on MTG card borders in this post.

This is what we’ll be going over:

A Brief History of Magic: the Gathering

If you’re new to the game, here’s some light background information on what Magic: the Gathering is.

MTG is a card game that began in 1993. Since then, it has continued to release new sets of cards periodically every year.

So how does it work?

At its core, Magic’s premise is quite simple. You and your opponents each have a total of life points, and you win by eliminating your opponents’ life totals.

Players can reach this goal by casting a variety of spells. Spells are cast by expending mana, which is typically provided by land cards.

The thing about MTG, though, is that there are almost always exceptions to the rule. For instance, there are other ways to win than just using brute force to blast away your enemies’ life totals.

There are also numerous ways to get mana other than lands.

However, that is Magic in a very simple nutshell.

Black and white are far from the only colors that borders have come in.

There have actually been a wide array of border types used on MTG cards throughout the years, and each one has a different meaning.

The borders you’ll find on Magic cards across the years are the following: 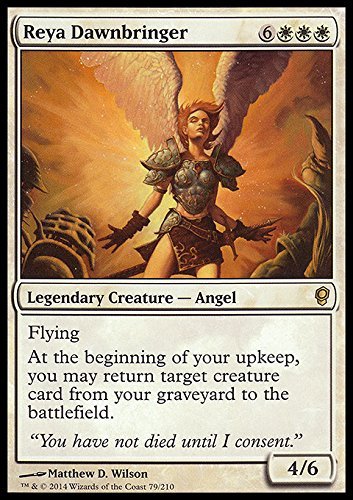 When the first cards came out in 1993, they used black borders.

This was actually really unusual at the time, as many other collectible cards used white borders. There isn’t really an explanation on why they started this way.

But if you’re interested in reading deeper into the story of the card design, take a look at the story on the official site here.

Black borders stopped briefly for core sets ranging from Unlimited, Revised, and 4-9th editions. However, they continued to be used on expansions during this time period.

With the advent of 10th edition, black borders returned to Magic core sets and have been used ever since.

An example of a black-bordered card is Reya Dawnbringer, pictured above. 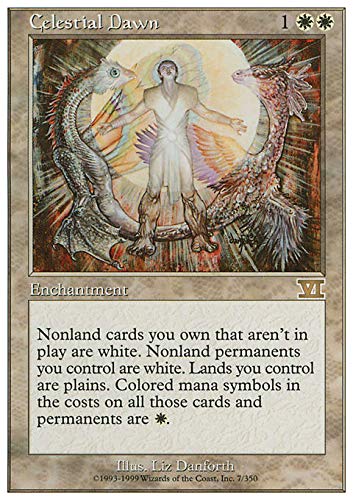 Only after the first couple core sets did white borders see an appearance on MTG cards.

The reason for this was to ensure collectability. At that time, there weren’t symbols for the sets, and so the only way to tell the cards apart was to look at the black or white border.

Pictured above is an example of a card with a white border, Celestial Dawn. 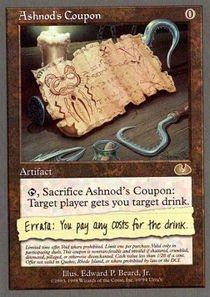 To date, three joke sets have been printed for MTG: Unglued, Unhinged, and Unstable.

For the most part, these hilarious sets use silver borders. This is to show right away that they are not legal for tournament use.

Why aren’t they legal? Simply because they contain comedic mechanics on purpose.

An example would be Ashnod’s Coupon, which requires one of the players in the game to get the user a drink.

These sets are obviously best played in casual games among friends. 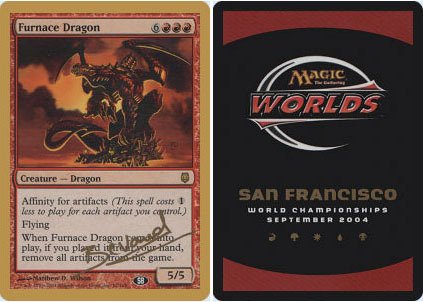 Like those with silver borders, cards with cold borders are also not permitted for tournament use.

The border isn’t the reason they’re not legal, though – it’s the backs of them. If the card back doesn’t look uniform with legal cards, it can’t be used in official Magic events to prevent cheating.

We’ve included a picture of a card with a gold border above: Furnace Dragon. 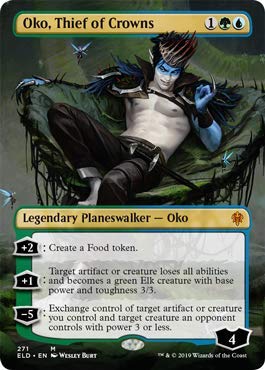 (Extended Art) Once Upon a Time 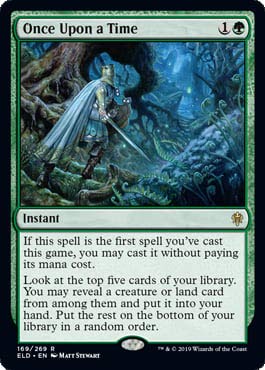 Aside from color, there are a few other miscellaneous types of borders. This includes borderless, full-art, and extended art cards.

Borderless cards, as their name implies, don’t have borders at all. The artwork goes all the ways to the edges of the card.

Extended art cards look the same as normal cards, except the artwork extends outside where the box would normally be at the top.

Full-art cards have artwork that extends all the way to the top and bottom of the cards, stopping only at the border. These cards are especially popular.

Which MTG Sets have White Borders?

If you’re trying to add more white-bordered cards to your collection, which sets should you buy from?

The list isn’t that large. White-bordered cards can be found in the following sets:

It remains to be seen whether or not cards with white borders will ever make a return to Magic: the Gathering.

Regardless, you can be sure that we’ll continue to see beautiful and interesting artwork in each set.