Home » MTG » Why do MTG Cards Say Deckmaster? (The Story Behind the Card Design)

Over the decades of its existence, many things have changed about Magic: the Gathering.

From new cards to new rules to new strategies – you could almost say one of the only constants in the game is change. But that wouldn’t be entirely true.

One of the things that has remained the same is the design on the backs of Magic cards. It’s left more than a few people wondering: why do MTG cards say deckmaster?

It’s a pretty quick story. We’ll be covering that and a bit more in this post.

This is what we’ll go over:

Beyond that, the Wizards of the Coast site is an amazing resource for beginning Magic players. their site for a wealth of Magic: the Gathering information. (Link:

Approach of the Second Sun 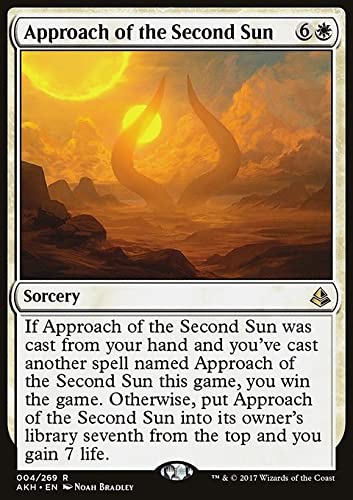 Put briefly, Magic: the Gathering is a card game. It was created in 1993 and is published by a company called Wizards of the Coast.

How do you play?

You can both protect yourself and launch offensives against enemies by casting spells. However, you generally can’t just cast them for free – you need to spend mana in order to do so.

This mana comes in five colors: red, white, blue, black, and green. Each color of mana is produced by a corresponding land card.

The more land cards you have on the table, the more mana you have to cast with. More powerful spells tend to cost more mana, but there are plenty of noteworthy low-cost spells, too.

Additionally, you can win the game by meeting the requirements of a card with a win condition on it. Also called “wincons,” cards with win conditions will grant you an instant victory, provided you fulfill whatever they require.

For instance, Approach of the Second Sun is a card that allows you to win the game. You just need to find a way to cast it twice in one game.

So Why do MTG Cards Say Deckmaster on the Back?

Beyond that, the Wizards of the Coast site is an amazing resource for beginning Magic players.At a glance, the backs of Magic cards might seem unimpressive. But a lot of creativity and thought went into the iconic design used on the cards today – including the phrase “deckmaster.”

We’ll cover what various parts of the design mean, as well as the origins for the Deckmaster emblazoned on the back of every single card.

The Story Behind the Design of the Card Backs

Aside from special commemorative cards, the back of every single Magic: the Gathering card is identical. This is actually crucial for play, because if you could tell what a card was by looking at the back, you could potentially cheat.

So what do the features on the backs of the cards mean?

At the top, you’ll find the blue Magic: the Gathering logo. This in and of itself is pretty self-explanatory.

Beneath the logo, there are five colored spheres that are white, green, red, blue, and black. These represent the wheel of colors that mana comes in.

Behind the mana colors and logo, there’s a dark brown background with a lighter brown oval within. This is made to look like a book, so that decks of cards would resemble books of spells.

At the bottom of the backside of every Magic card, there’s a phrase written in black within the borders of a blue rectangle: Deckmaster.

Where did it come from? This has actually been written about on the official MTG site here.

The publisher at first planned to release a series of card games. All of these card games would be unified under one umbrella brand name, which was Deckmaster.

Magic was going to be one of these games. Although this brand name didn’t stick, it continues to be used today on Magic cards for the sake of uniformity.

If the design were changed now, there would be variations between today’s cards and the cards of the past. To keep MTG cards all looking the same, Wizards of the Coast chose to keep the deck branding.

The design of the cards is just one small part of Magic: the Gathering.

There’s tons more to discuss and learn about. If you’d like to dig a little deeper, take a look at our collection of MTG articles right here.

Beyond that, the Wizards of the Coast site is an amazing resource for beginning Magic players. Check out their site for a wealth of Magic: the Gathering information.