If you know much about card games, you’ve probably heard of Magic: the Gathering.

It’s an incredibly popular game enjoyed by millions of people. We even have an article about why it has so many fans here.

But on closer inspection, you’ll see that each box and pack says 13+ on it. So why is MTG rated 13+?

We’ll get to the bottom of this question for you, and explain factors that may contribute to its rating.

Here’s what you’ll find out: 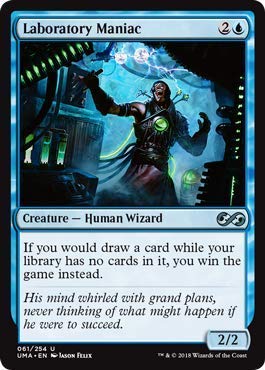 Before we continue, it’s important that you have an understanding of what MTG is if you don’t already know.

Magic: the Gathering is a strategic card game that was born in 1993. Since then, it has continued to expand with new sets of cards every year.

It requires two or more players. These players each have a total number of life points, and the objective of the game is to reduce your opponents’ points to 0.

There are countless ways you can do this. You can attack with fantastic creatures, cast offensive spells, or bypass the life total entirely with cards that have special win conditions stated on them.

An example of a card with a special win condition (also called a wincon) is Laboratory Maniac. There are many other cards with various conditions you have to meet before winning the game if you use them.

When you hear a little about what MTG is, it sounds pretty harmless. And truthfully, it really can be.

There are a few reasons for the rating. Some of the reasons that could contribute to this rating are:

As you can imagine, with tens of thousands of MTG cards available, there are equally as many ways to win games.

Strategies abound in this game. Many of them are potentially difficult for children to grasp, putting them on unequal footing against older and more experienced players.

Plus, these strategies get more and more complicated with every single set that comes out. New cards are released yearly, and those who don’t stay on top of the latest developments can get lost among the new strategies evolving constantly.

That’s not to say that there aren’t kids who can’t deal with the complexity of the game, because there are. However, as a whole, younger children may be overwhelmed or bored by the number of rules, strategies, and changes in the game. 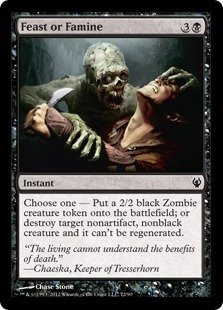 One of the things many fans love about MTG is the artwork on the cards.

The artwork is usually really high in quality. You’ll find breathtaking depictions of angels, dragons, landscapes, and more on these cards.

In some cases, fans love the artwork so much that they even have specific MTG artists they prefer over others.

Although the artwork is undoubtedly gorgeous, much of it contains themes that are better-suited for mature players. Some of these are suggestive in nature, violent, or maybe a little too horrifying for young children.

Although there are quite a few younger players, MTG’s players tend to be adults.

This may be a reflection of the competitive scene, where adults dominate in tournaments. Or it may be simply because many of the fans who have been playing since the beginning would have to be older.

Regardless, the maturity of the other players might put younger ones a little out of their element.

That’s not to say that there aren’t potentially groups of younger players that children could associate with, though.

We think there are reasons to support the rating of 13+.

Because it can be a difficult game to learn, the artwork has mature elements, and players as a whole tend to be older, it would be easier to introduce older children to it.

However, like with all things, there can certainly be exceptions. With a little monitoring and teaching, there’s no reason why a younger child couldn’t learn to play.

In fact, there are many kids who do play. In this case, it’s a matter of understanding what’s most appropriate for your child – and in the end, only you can determine that.

Interesting in introducing your kid to a card game, but feel like MTG might be a little too advanced right now? There are plenty of other options out there designed for children, such as Pokemon.