Home » MTG » Why is MTG so Addictive? (Top 7 Reasons Players Keep Coming Back) 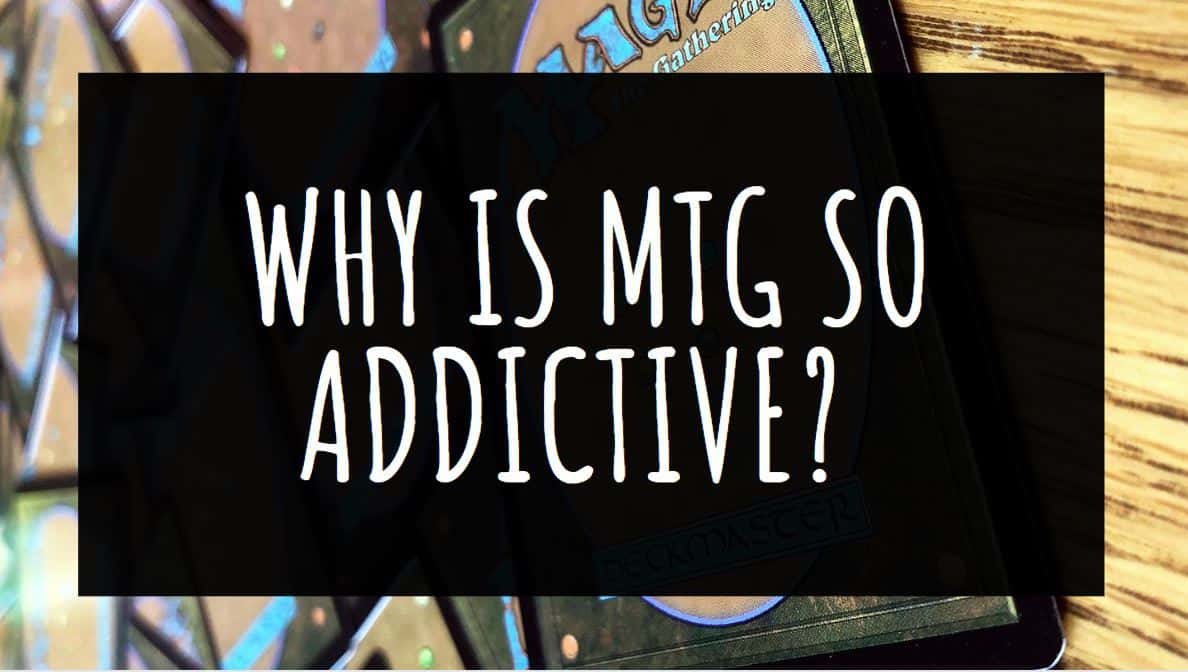 More likely than not, you’ve heard of or know at least one person who plays Magic: the Gathering. Perhaps even you yourself play.

One thing that many people have noticed once they’ve gotten into the game is that it’s hard to stop playing once you start. So why is MTG so addictive?

There are actually many good reasons why this legendary card game has such a dedicated fan base. We’ll explain them for you.

In this article, we’ll cover:

Use These Links to Navigate this Guide >>
What is Magic: the Gathering?
Top 7 Reasons MTG is So Addictive
Is MTG Worth Getting Into?

Simply put, Magic: the Gathering is a card game that was created in 1993.

Two or more players compete to reduce each other’s life total down to 0 in order to win. Although that is the main way to win the game, there are many other ways, too.

Over its almost thirty-year lifespan, tens of thousands of cards have been introduced to the game. The combinations of cards you can combine in a deck are virtually endless.

Top 7 Reasons MTG is So Addictive

If it didn’t have something to offer its players, MTG would have faded in popularity a long time ago.

Fortunately, the publishers, Wizards of the Coast, are inventive. They constantly find new features to bring into the game that entice fans to keep on playing.

The main reasons players continue to playing MTG are the following:

Just like many other collectible items, MTG cards can get shockingly high in value over time.

The rare and elusive Black Lotus card, which was printed in the first ever Magic set, very famously sold for $166,100 in 2019. You can read more about that sale here.

Obviously, this is more of an exception to the rule than the rule itself. Black Lotus is well-known among Magic players new and old for being extraordinarily expensive.

But many other cards also see their own prices slowly increase with time. For that reason, many players like to stock up on cards that look as if they might one day be valuable.

It also makes the experience of opening a booster pack particularly exciting. You never know when you’re going to get something rare and pricey.

Building a powerful Magic deck is like an art form.

Because there are so many different cards to choose from, no two decks are likely to be the same. All the options out there make it possible to tailor a deck to your own specific preferences.

Some even end up with a bunch of different decks for different occasions or moods.

When you can constantly craft entirely unique decks, it’s no wonder some Magic players keep returning to or never leaving the game. 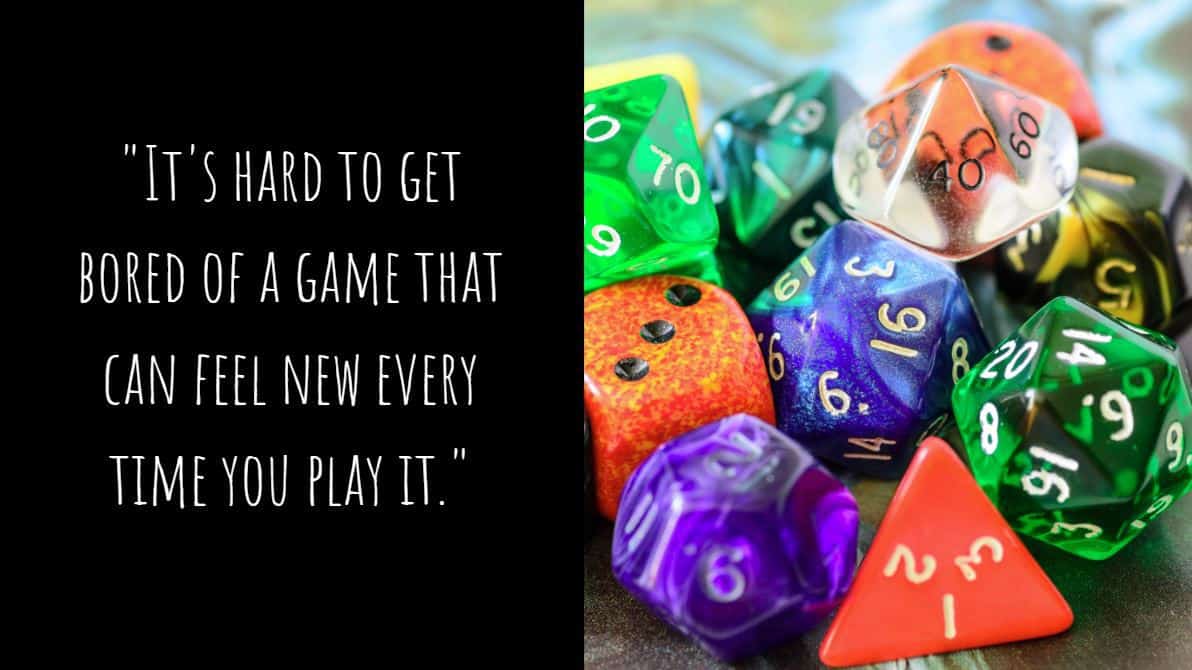 Just like the possibilities for decks are never-ending, so are the games themselves.

With many players having multiple decks that use various mechanics, the feel and outcome of each game can vary drastically. Players can switch decks in between games, or even swap to a totally different game format.

It isn’t like a board game with victory conditions that are set in stone. Rather, the conditions change every time, giving MTG a fresh feel with just about each match.

It’s hard to get bored of a game that can feel new every time you play it.

One of the many things that makes Magic so well-loved is just how social a game it is.

It’s not made to be played alone. Because of that, it’s a game night staple for groups of friends all over the world.

Friends can watch each other to see which decks each person makes, which ones cast the most threatening creatures, and what combinations of spells are used. A lot of other games are improved when you add your best friends into the mix, and MTG is no exception to the rule.

Just when you think you’ve seen it all, a new set of cards comes out with intriguing new mechanics.

Before Magic players get a chance to feel complacent with the game, there’s another expansion to the card pool. This requires fans to be ever-evolving and adaptable with the changing times in order to consistently dominate games.

Furthermore, since it’s constantly changing, Magic manages to make itself feel fresh year after year. More and more cards are being frequently added so that everyone’s interests and preferences are met. 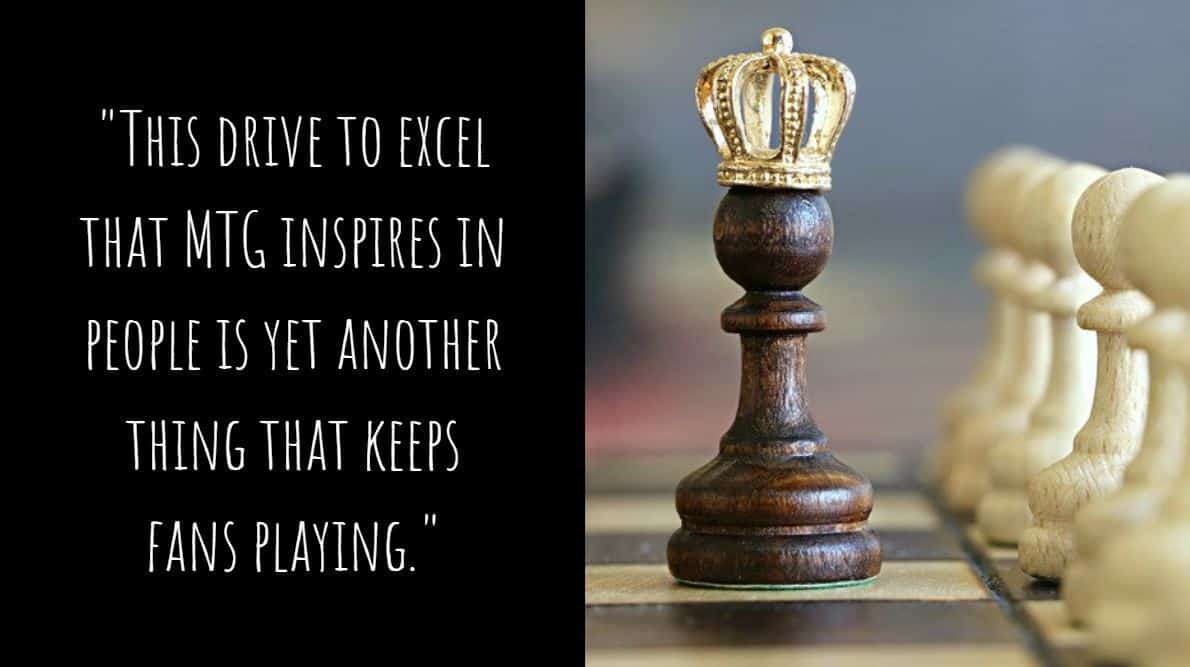 Games bring out the competitive natures in a lot of people. Magic: the Gathering also magnifies this quality in its players.

Due to the competitive drive in its fan base, there are tons of MTG tournaments held frequently. Prizes in these contests can be anything from valuable cards to cash.

But even if you don’t play at any level that could be called professional, quite a few people discover themselves competing with their friends in MTG. Building a deck that impresses your friends simply feels great.

This drive to excel that MTG inspires in people is yet another thing that keeps fans playing.

Creating the best deck isn’t the only thing MTG players strive to do.

Some are drawn to the collectible aspect of the cards. With the possibility of some of them growing in value, some take to collecting as many of the cards as they can.

Many fans fill binders and binders with tons of cards. More than a few even make displays of their huge collections to show off to their friends.

So even if you aren’t playing in competitions or crafting fine-tuned decks, there’s much satisfaction to be had in having one of the biggest collections of MTG cards.

Is MTG Worth Getting Into?

Magic: the Gathering has been around for almost 30 years now, and if the trend is stable, it will probably be around for awhile longer.

But you might still be wondering: is MTG worth getting into?

Believe it or not, you’re the best person to answer that question for yourself. Stop to think about your own personal interests.

For example, if you love games that require you to come up with unique strategies, MTG might be a pretty good option for you.

It’s also fantastic for lovers of high fantasy. Many of the cards feature classic fantasy elements, like dragons, fairies, and vampires.