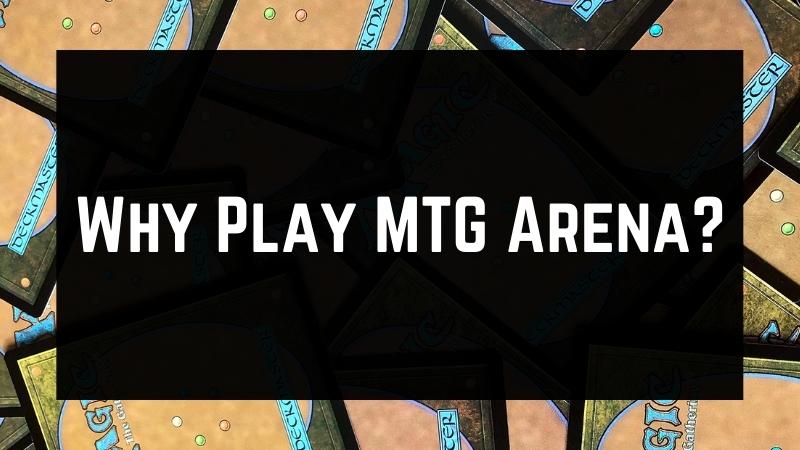 There’s no doubt about it: Magic: the Gathering is an immensely popular game.

Over the course of its almost 30 years of existence, millions of people have played and continue to play today. We even have an article discussing the reasons for its popularity here.

With a massively expanding online world, it’s no surprise that MTG would make its own mark in online gaming with its MTG Arena.

If you’re a fan of Magic, you might be wondering: why play MTG Arena? Is it worth it?

In this guide, we’ll be discussing:

What is MTG Arena?

Virtual versions of just about anything exist nowadays.

While Magic itself is a well-established game that’s been around since 1993, MTG Arena is fairly new. It takes advantage of a growing interest in online card games.

For instance, one other example of a popular online card game is Blizzard’s Hearthstone. There are many others beyond that.

If you’re interested in learning more about MTG Arena basics, you can check out Wizards of the Coast’s official starter guide here.

MTG Arena wouldn’t have a player base at all if there weren’t any solid reasons to play it.

And on closer inspection, there’s actually a ton of reasons MTG Arena has players. Some of these reasons include the following:

If you’ve played a lot of Magic before, you’ve probably had games where turns were drawn out by trying to figure out how specific cards interact with each other.

This isn’t an issue with MTG Arena. The rules and interactions are already programmed into the game, so they happen automatically.

So there’s no more arguing with your friends about which effects and abilities would happen first.

Play with Anyone Around the World 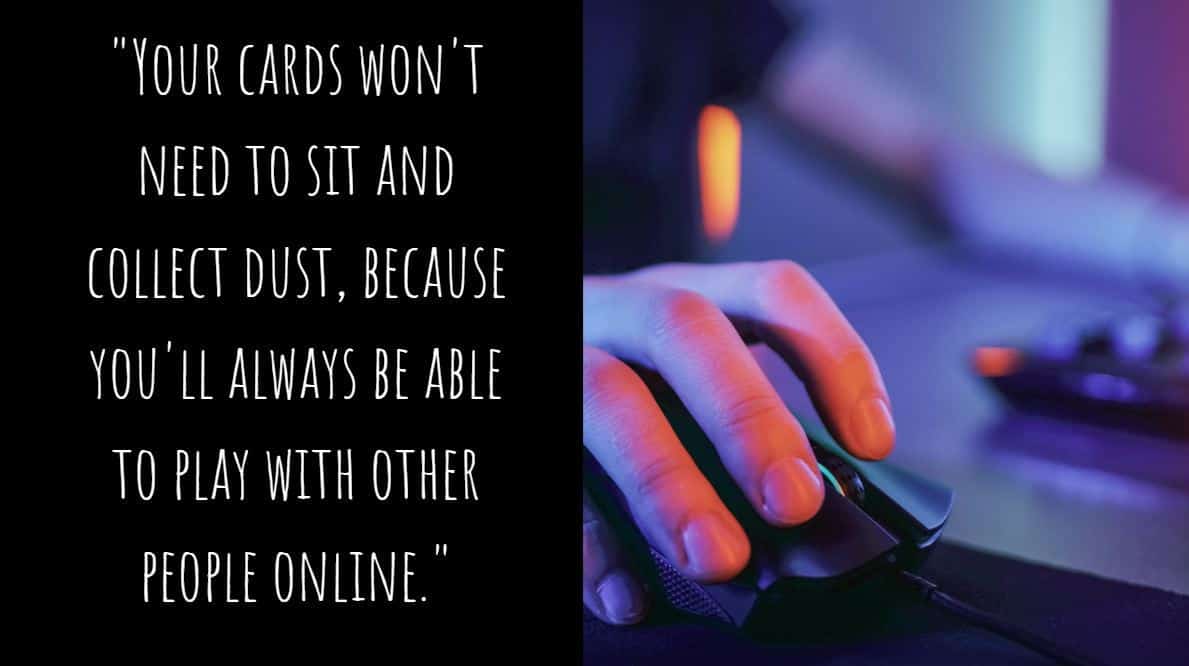 We’ve all had days where we just want to relax and enjoy our hobbies from home.

With MTG Arena, you can have satisfying Magic matches without having to go out to local game stores or to a get-together with your friends.

This is especially important if you live in area where there aren’t many MTG players. Your cards won’t need to sit and collect dust, because you’ll always be able to play with other people online.

Your Card Collection doesn’t Take up Any Space

Large Magic collections can take up an astonishing amount of space.

Factor in the decks made bulkier by sleeves, and then the boxes you store them in…and the room your collection needs expands even more.

While plenty of players have found creative solutions for storing and organizing their cards, it still takes a lot of time to plan out storage. Many others simply resort to keeping their cards in boxes of all shapes and sizes.

This is yet another non-issue with MTG Arena. Because the cards are virtual copies, they don’t take up any more physical space than your computer does.

You Only Need Four of a Specific Card

It’s pretty common to have buy the same card over and over again so you can use it in multiple decks at once.

On MTG Arena, you only ever need to get your favorite cards four times. Once you have four copies of them, you can use them in any number of decks.

Furthermore, if you open a pack and get a card you already have four of, you get a token. The token can be used to exchange for a card you need that’s of a similar rarity.

No Need to Buy Additional Sleeves or Deck Boxes

The cost of sleeves and deck boxes can really add up over time.

Since MTG Arena’s cards are online copies, you obviously won’t need to buy sleeves or deck boxes for them. Of course, there are sleeves you can buy in the game for aesthetic purposes, but you don’t absolutely need to use them.

In the end, not having to worry about how to protect your cards saves you a little bit of money.

Potential to Earn Packs Instead of Buying Them 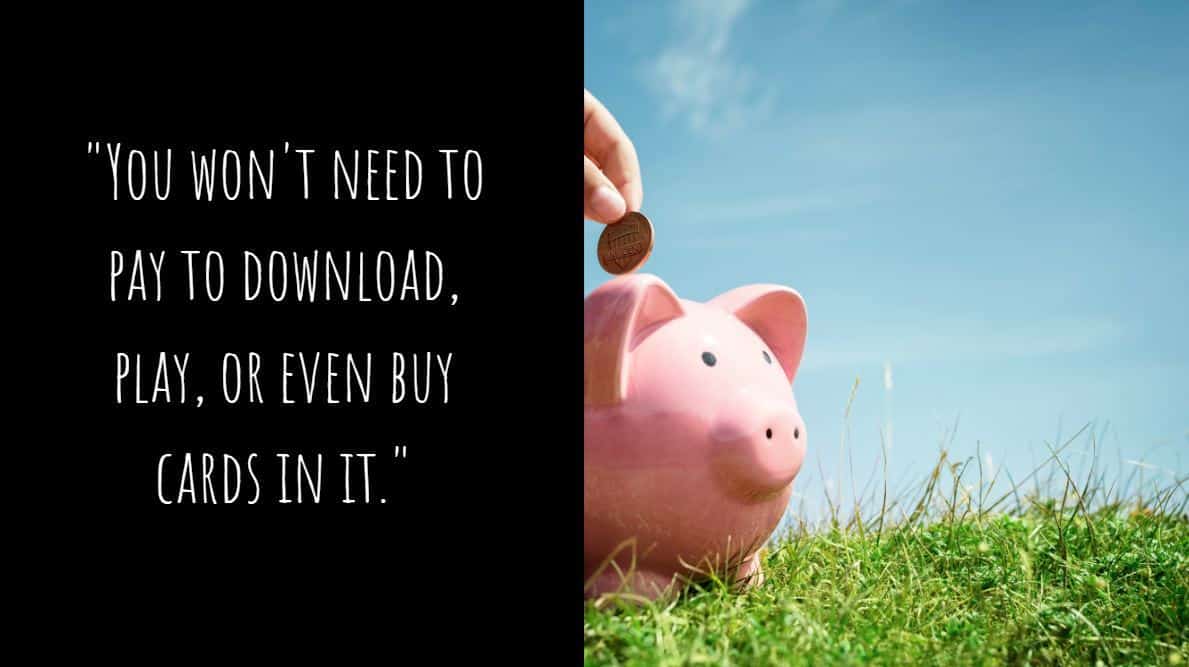 Not only can buying quality sleeves and deck boxes be expensive – so can buying the cards themselves. Actually, the cards are the largest investment in Magic: the Gathering.

And with new sets coming out every year, it can get overwhelming. Keeping on top of each new development can rack up a pretty big cost quickly.

MTG Arena combats this worry about price with its free-to-play status. You won’t need to pay to download, play, or even buy cards in it.

Through completing quests and playing against other players, you can earn free packs of cards.

However, you also have the option of buying packs if you don’t have the time to build up to earning one.

When it comes to having an online presence, most people love being able to express their own individuality.

This is also possible in MTG Arena. With a ton of avatar options to use as profile pictures and virtual deck sleeves that will give your deck its own look, you can ensure that your account is truly you.

These factors don’t necessarily have an impact on the gameplay itself, but they’re nice touches to help you personalize your experience.

You won’t need to struggle to put together a deck at the beginning of MTG Arena.

Right at the beginning, you’ll be given starter decks and a bunch of free cards. That way, you’ll be even closer to crafting the perfect deck for your own personal play style right from the start.

A large part of Magic: the Gathering takes place in the minds of the players.

There’s art on each card depicting the artifact, monster, or character, but it’s just static art. When you swing a creature at your opponent to attack, you don’t really see anything happen.

During even the most intense games, all onlookers would see is cards on a table. It’s completely different in MTG Arena.

Different cards and actions have unique and flashy animations, so you can literally see creatures attacking. It adds an interesting dynamic to a game that typically needs a little imagination. 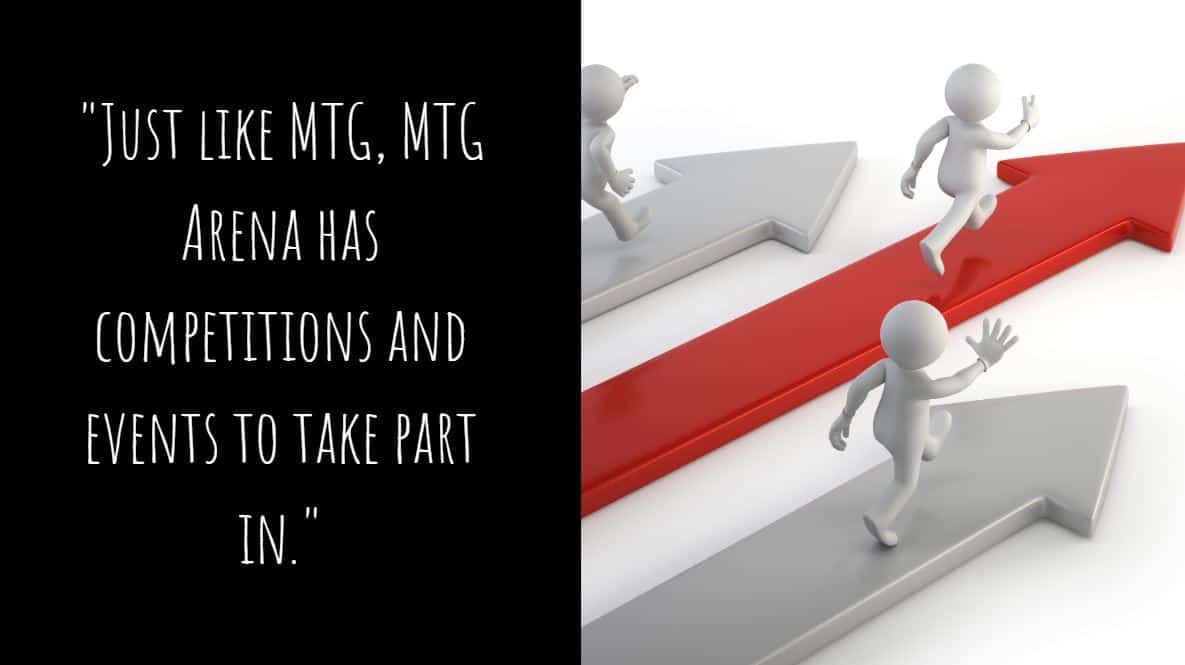 Just like with MTG, MTG Arena has competitions and events to take part in.

Aside from building a sense of community, these events let you show off your skills. There’s nothing like a little competition to pique your interest and force you to improve.

You can find out more about current events going on in the world of MTG Arena here.

As with all things, there are both good and bad sides to MTG Arena.

Fortunately, there aren’t as many drawbacks as there are benefits. Particularly dedicated fans of the physical game, however, may find these drawbacks outweigh the advantages.

Some of the greatest downsides to MTG Arena are:

Unless you have a computer that you can play games on, you won’t be able to play MTG Arena, because as of early 2020, it doesn’t have an app.

There are some guides online about how you can play the game on your phone. But it’s important to mention that these are not official guides, so it can’t be guaranteed it would work for you or be optimized for your phone.

This may not be a big issue for extremely active MTG fans. But not everyone has a computer readily available, so this limits the amount of people who can play. 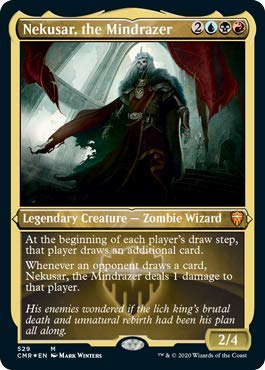 There are tons of different ways you can play Magic: the Gathering, but one of the most popular ways to play is Commander.

In Commander games, players have 100-card decks with one of those cards being a legendary creature they use as a sort of general. This legendary creature card usually sets the tone for the nature of the deck and in some way highlights the strengths of the rest of the cards.

A fairly common Commander, for example, is Nekusar, the Mindrazer. Nekusar takes drawing cards, something that happens at least once a turn, and uses it to damage opponents.

This favorite format isn’t available in MTG Arena. Several other formats are missing, as well.

If your preferred format is Commander, for example, then you may not enjoy the game as much.

Not as Many Available Sets

Unlike the physical card game, beloved older sets are not available in MTG Arena.

That’s because MTG Arena focuses on Standard, a format that only uses the most recent sets. At this point in time, the farthest back MTG Arena goes is to Ixalan, which was released in 2017.

As Magic: the Gathering has been around since 1993, this leaves out a ton of prominent cards. Fan favorite sets, such as Innistrad and Mirrodin, aren’t available in the game.

Should You Play MTG Arena?

All things considered, you might be wondering at this point whether or not you should play MTG Arena.

While it’s true that some fans might look at the drawbacks and feel they outweigh the advantages to the game, you get to decide for yourself if you feel similarly.

If you’re a fan of older sets, you might not be drawn to MTG Arena. Likewise, if you prefer to play Commander over all other formats, MTG Arena might not be for you.

But if you’re a player who likes the newest sets, you don’t have room to spare for cards, or you just want to be able to play from the comfort of your own home, then MTG Arena is absolutely worth a try.

Even if you’re a beginner who’s just interested in the game, there’s no reason you shouldn’t give it a shot. After all, it doesn’t cost anything other than time to start playing.