Home » Nerf » 10 Different Types of Nerf Darts – Do You Know Them All?

I'll admit it, I'm an adult that loves Nerf guns. I recently got into it because of my little cousin who showed me his collection and all of the different types of games he played with his friends. Where was that stuff when I was a kid? So in this post I've listed out 10 different types of Nerf darts that you may not know about. 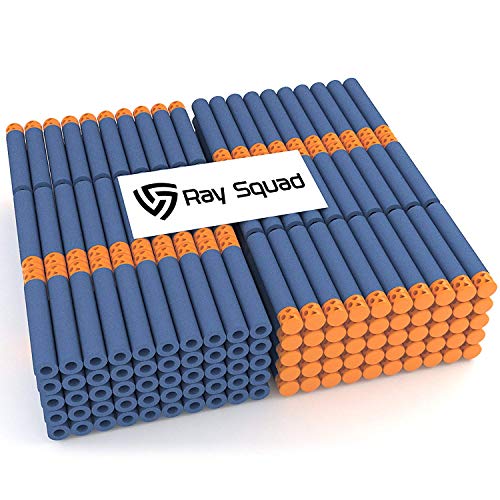 This is the most popular type of nerf dart that you can buy on the market today, and they are designed to be easy to shoot and to travel long distances accurately without causing much damage when they make impact with their target.

Although these could injure another person when shot at close range or shot in the face, traditional nerf darts generally do not cause a lot of damage due to their size and how soft they are.

They come in a wide variety of designs, making it possible for nerf gun aficionados to choose the darts that will work best with their nerf gun, as well as their shooting and playing style.

Traditional nerf darts have a soft foam body, as well as a harder tip, that helps to balance the body and give them the weight necessary for proper flight.

Even though the tip is harder, it is not as large as on mega darts, which means that it won’t hurt as much and is less likely to cause damage when used in the house. 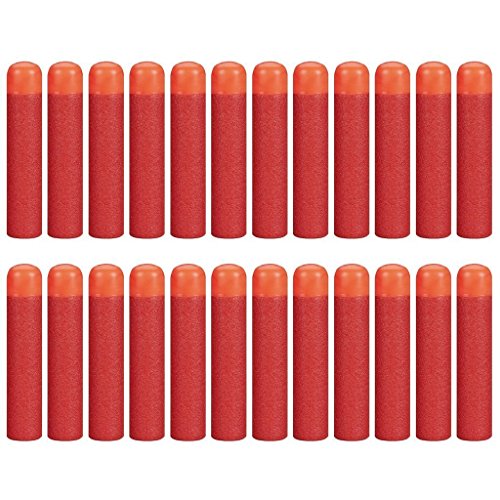 Mega nerf darts are much larger than traditional darts are, which means that they can not only cause more damage if they hit something at close range, but are also more likely to hurt when they hit a person.

Their larger size makes them significantly easier to find when they are lost, which is one reason why a lot of players turn to this style of nerf dart.

They tend to be more intimidating than traditional nerf darts and also require a much larger gun to shoot them, which can slow down a player, while at the same time making them a force to be reckoned with. 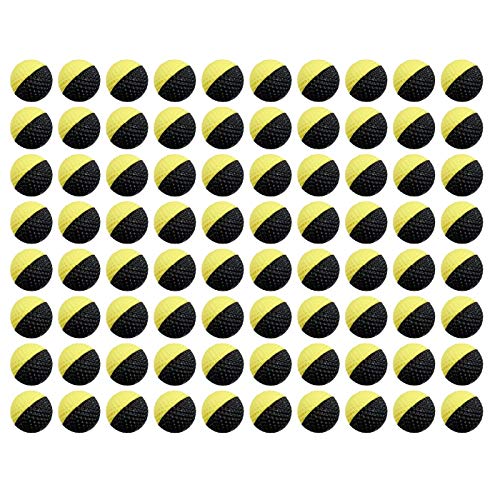 While they are considered to be a nerf dart, high impact rounds are actually spherical rounds that are shot out of a nerf gun.

They are the hardest hitting of all nerf darts, which means that they can cause the most damage and easily injure another player if shot in the face.

Due to the fact that they can easily cause injury, these rounds are rated for use by players who are 14+.

Made from a durable foam, these balls can be shot very quickly, making them easy to use for rapid fire situations. However, their weight and shape tends to prevent them from traveling as far as traditional nerf darts are able to.

These rounds tend to bounce around a lot once they land, which can make them rather difficult to find when playing a game.

While most nerf darts can be used with different series of guns, there is only one series that will fire this type of round. 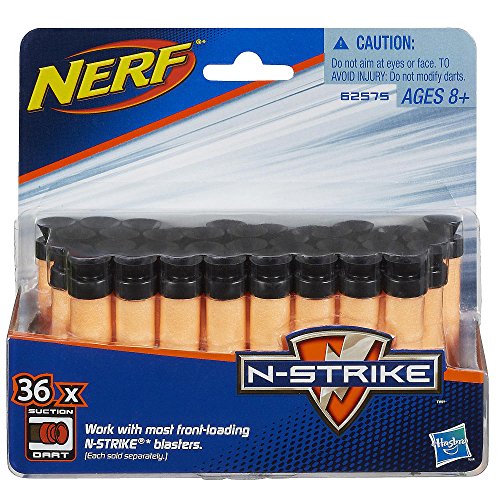 Suction nerf darts look like traditional nerf darts, but have a small suction cup on the end of them, which can allow them to easily stick to certain surfaces in a home, such as windows, cabinets, and walls.

They have a suction tip that is the same size as the body, which improves their performance and makes them very easy to shoot and to aim. This results in a streamlined dart that generally flies evenly through the air and is fairly easy to control.

Because the suction cup tip on these darts doesn’t have any holes, air is forced to pass evenly around the tip, which means that the dart enjoys a balanced and smooth trajectory without a lot of distortion.

However, the suction cup tip does still provide a fair amount of drag, which slows down its travel through the air, but this helps to ensure that the darts are safe to use around other players and in the home.

Glow in the Dark 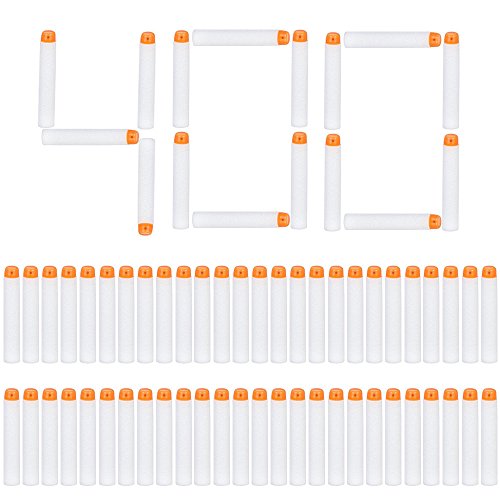 These nerf darts are a great option for any players who want to enjoy playing nerf guns in the dark.

They are easy to see when they have been exposed to the light, which makes them a wonderful option for users who like playing nighttime games.

Older versions of glow in the dark darts had phosphorescent paper that was stuck to the body of the dart, while newer versions have a body made from foam that glows in the dark.

Glow in the dark nerf darts also have glowing tips, which makes them easier to see, even if the body doesn’t glow very well.

They fly the same as other nerf darts do, which means that they can easily be used in the light as well, although they can be tricky to see due to the lighter color of their body.

Not all glow in the dark nerf darts will glow as well as other types, so it’s important to choose high-quality ones that will last for a while. 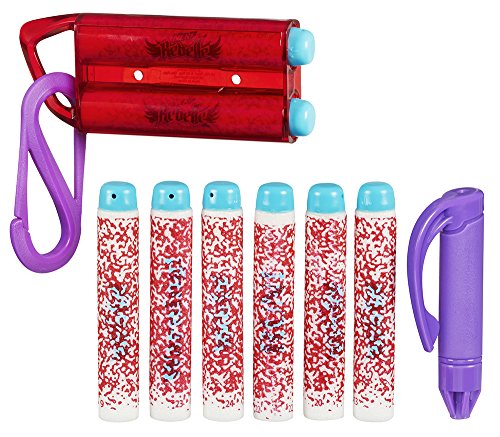 This is a special type of nerf dart that comes with a message decoder so that users can write messages on the darts to each other and then read them at a later time.

They have a blue dart head, as well as a body with red dots and squiggles on them.

There is a special pen packaged with the darts that users can use to write on the dart. Because of the color of the pen, the message can’t clearly be read without using the decoder.

By putting the dart into the decoder, users will be able to see what was written on the darts.

The pen will wipe or wash off of the dart, which makes these nerf darts great to use over and over again, as long as they are cleaned correctly so that the pen won’t leave behind smudges that will make the dart difficult to read. 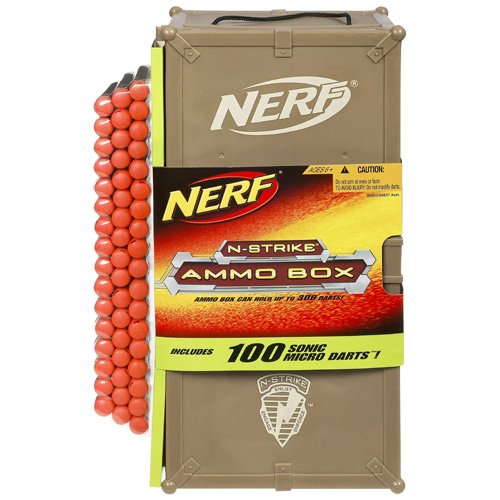 Micro darts were very popular when nerf darts and guns were first released.

They have a smaller suction cup head that is very strong and can easily stick to most surfaces, even when fired from long distances, making them great for use inside and outside.

Because they are made from a foam that is a bit more delicate than other nerf darts, they are damaged easily, so users need to be a bit more careful when using this type of dart.

There are some versions of micro darts that have suction cups that are smaller than the body of the foam, but most have a suction cup that is the same size.

They do tend to be smaller in size than traditional nerf darts, so it’s important to make sure to choose the right size nerf gun for their use to be able to shoot them easily and accurately. 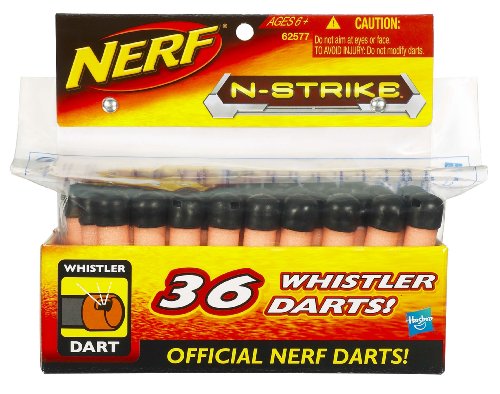 This type of nerf dart was first released in 2003 and has a very small opening at the top of the dart, which causes it to make a whistling sound when it flies through the air.

These darts are unique because users can hear them coming, which adds a fun element of excitement to the game.

However, due to the hole cut into the dart, they do tend to be a little bit less accurate than other types of nerf darts.

By making sure that the opening on the dart is facing up when the dart is fired, users can help improve their range and distance by catching an updraft.

It can be frustrating for some dart users to learn how to best aim and fire these darts, especially in a fast-paced dart game, which will result in lower distances traveled. 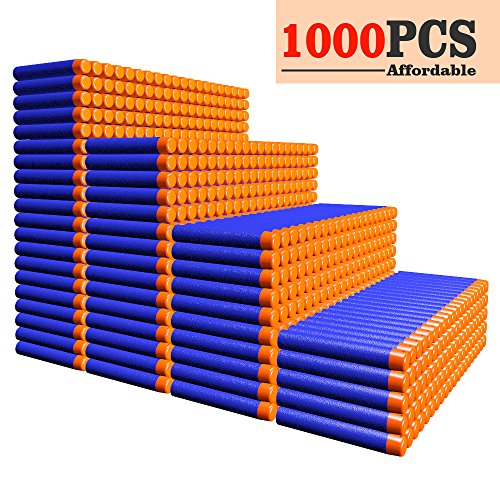 These nerf darts are compatible with Streamline drums and clips, even though they are a little bit different than the nerf darts designed for this series.

They have a different color scheme, with a blue body and bright orange tip, which helps to set them apart from other similar nerf darts.

The shorter tip plug means that they can be easily used with a variety of different guns and blasters.

Due to the changes in their design, these nerf darts tend to shoot farther than other options.

While they do vary in both accuracy and range, depending on shooting conditions and the skill of the users, they can easily shoot up to 75 feet when fired in ideal conditions.

However, because these darts have a small hole in the head, this can cause a lot of air resistance to push up on the head of the dart and then drag through the hole, unbalancing the dart. 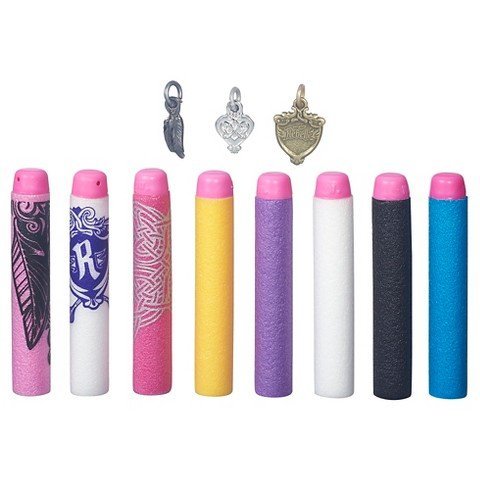 These are incredibly similar to traditional nerf darts, but have the major difference in that they have a varying color scheme.

They are used with Charmed blasters, but can be used with different series blasters as well, depending on the size of the blaster and the type of dart that they take.

There are six different color schemes that users can choose from when shopping for charmed blasters, all with pink heads and different colored bodies.

Additionally, it’s easy to find charmed blasters that have differing tamographed logos and patterns in combinations of white, purple, black, and pink.