Star Trek has been a beloved sci-fi franchise since 1966. It’s reached far and wide, securing millions of fans over the course of its existence.

Whether you consider yourself more of a Star Trek or Star Wars fan, the prevalence of the former is undeniable. If it’s been around for over 50 years, you can safely expect it to be culturally significant into the future.

Not only has it served as an inspiration to cosplayers and fans around the world, but it has spawned the existence of many board games. These games are the perfect way to bring your love of the franchise to your tabletop.

But where do you begin? Given the options that are out there, that’s a valid question to ask. That’s why we’ve gathered ten of the best Star Trek board games available here. 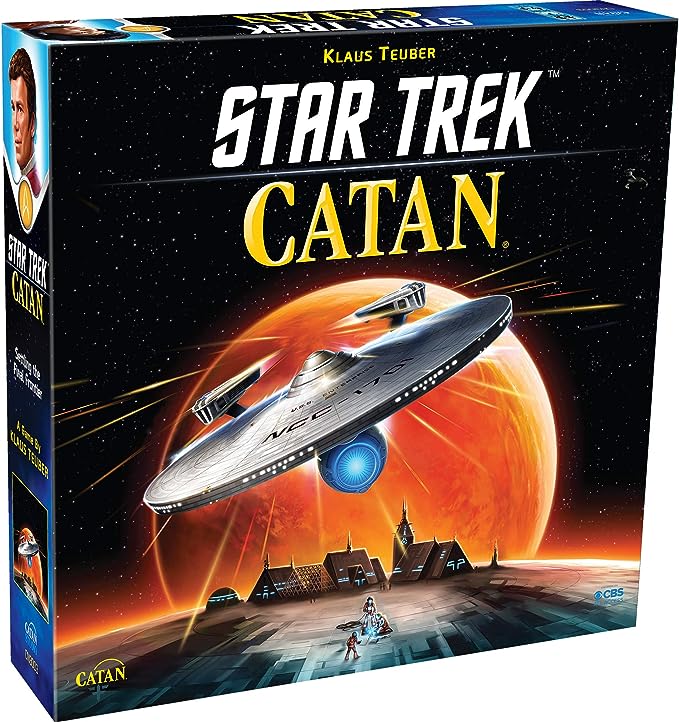 The greatest thing about Star Trek Catan is that it takes the best of two popular worlds, Star Trek and Settlers of Catan. If you’re a fan of both those things, you’ll love how this one board game combines both of them, allowing you to indulge in two fandoms at once.

Requiring three or four players, you won’t need to struggle to find enough people to play it, either. This is something you’ll be able to break out and play with just a small handful of people. And once it’s all set up, you’ll be able to admire the well-designed board and figurines. 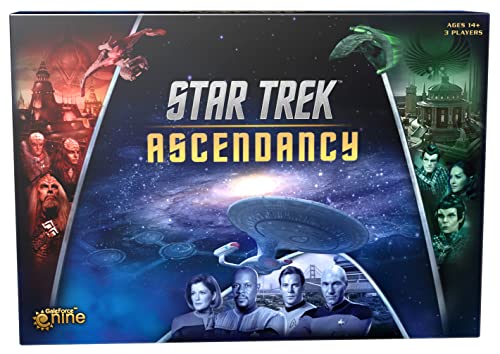 In Star Trek Ascendancy, you can choose to play as one of three popular races from the series: the Federation, Klingon, or Romulans. This is perfect for those fans of the franchise who want to share their love of the lore with someone new.

One of the most interesting aspects of this game is its board. It expands as you play, which makes each game different from each other.

This isn’t the kind of game you’re going to get bored of, because it will be different every time. Plus, just like the spirit of the show, you’ll be given the opportunity to explore the universe and meet other cultures. 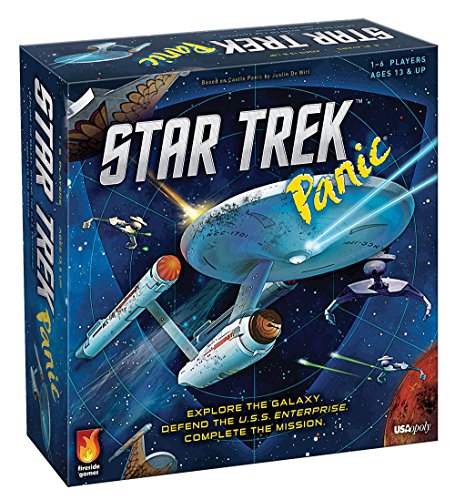 Are you trying to find a game that will tone down the competition a bit? Star Trek Panic is a fantastic choice, especially if you’ve got a few people in your friend group that tend to take competition a little too seriously.

In Star Trek Panic, you and your friends play as crew members on the U.S.S. Enterprise. Rather than compete to win, you must work together to protect the ship from various obstacles. If one of you fails, all of you might fail – and the same goes for winning.

The players lose the game if the ship is destroyed. We know we’ve experienced a few people who like to flip tables when competition gets too intense, so a game like this could be perfect. 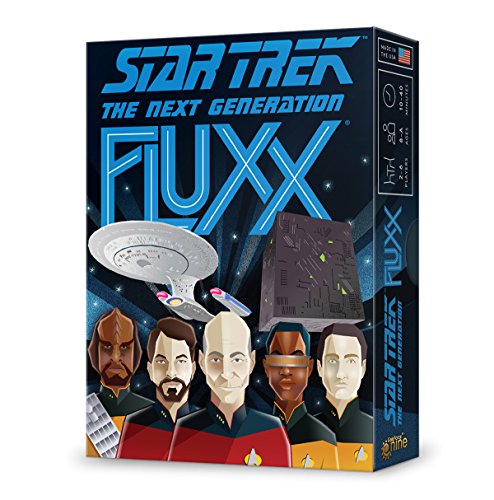 Okay, so we might be cheating a little bit by adding a FLuxx game, because it’s more of a card game than it is a board game. However, we couldn’t resist adding it to the list because we think it deserved to be mentioned.

Star Trek TNG FLuxx is a game you’ll never be able to predict. The outcome and even the rules change with every single session.

Furthermore, since the pieces are cards, there’s no complicated setup here. You won’t need to spend hours setting it up beforehand and putting it away once the game is finished. 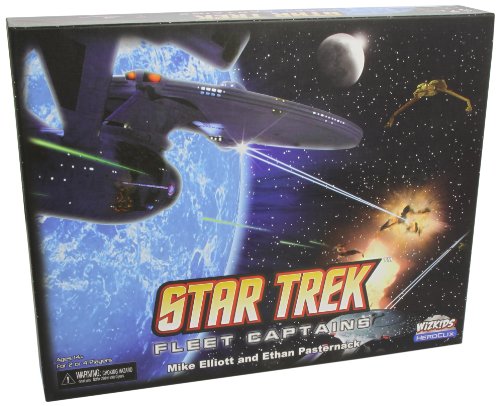 This game focuses more on the ships from the series. So if you’re a spaceship fan, this is the game for you, as it puts you squarely in control of the Federation or Klingon fleet.

Once you choose your fleet, you’ll have 12 different ships to choose from during play. The game also supports a range of play styles. You can either take your opponent on directly or focus more on completing missions around the board in order to win the game. 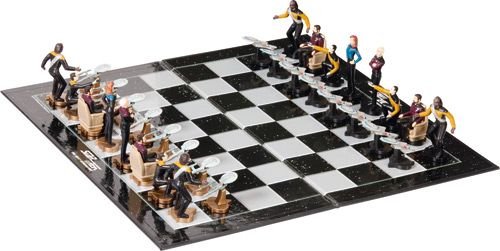 Here is a futuristic twist on an otherwise classic game! Just as you might have guessed from the name, this is a chess set in which the pieces are modeled to look like characters and ships from the series.

The detailed little pieces come stored in a durable package. In between games, you won’t need to worry about the pieces or board being damaged. 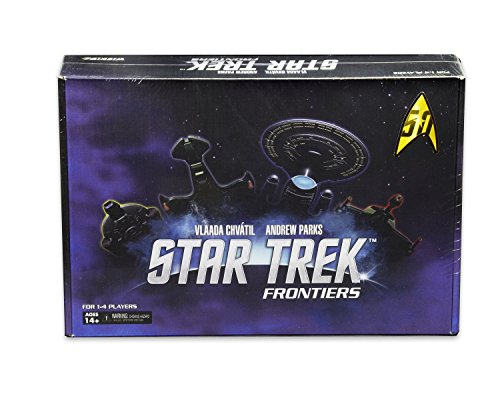 Sometimes, you just want to sit down and play a board game without having to coordinate with a group of friends. When you’re looking for something you can play without getting a bunch of people to agree on it, Star Trek Frontiers is a fantastic choice.

Because 1-4 people can play it, you can easily run a session by yourself. If you’re bored by yourself or can’t get everyone to agree on it, then you can still play it.

Perhaps best of all, it comes with different scenarios. You can play it competitively or cooperatively depending on what mood your friends are in. 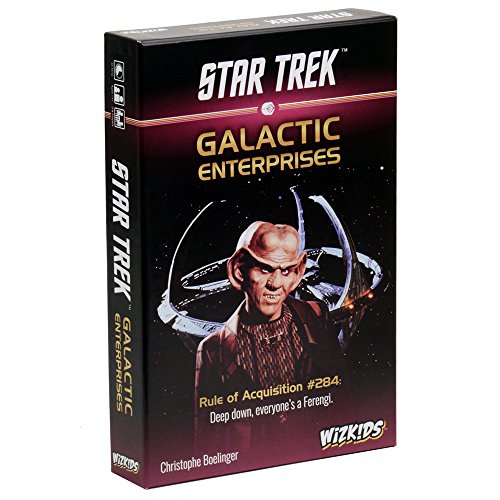 This is the perfect game for anyone with a business sense. In WizKids Star Trek: Galactic Enterprise, you play as a Ferengi shopkeeper trying to peddle your wares on Deep Space 9.

Your goal is to purchase supplies to sell, then turn around and make a profit on those supplies. Other players will try to purchase the same supplies and undercut you.

Need a game that can support a larger group of people? Star Trek: Five-Year Mission could be the game for you, as it can support up to seven players. That means you can bring it out for a medium-sized gathering without leaving anyone out.

Because the duration of each game lasts anywhere from 30-45 minutes, you’ll be able to fit more than one session in a night. Or, you can swap it up and play another game right after. You won’t need to stay up all night, falling asleep over the board after several hours of play with this one.

Say you want to turn up the heat of your game night while giving it a sci-fi twist. The Klingon Collector’s Edition of Monopoly is exactly what you’re looking for.

We’re all familiar with the game. Monopoly is great for families and people of all age groups, and allows you to dominate the board as a businessman. The difference here is that the Klingon Collector’s Edition takes this classic game and turns it into an intergalactic adventure.

What to Consider When Buying a Star Trek Board Game

Before you purchase any board game, you should think about how many people are needed to play it. If you’re planning to play it more than occasionally, you might want to look for something that doesn’t require as many players. After all, it’s surprisingly difficult to get a large group of people to agree to play one game.

On the other hand, there’s something really fun about playing with more than a few people. Games get more intriguing, because you have more types of players around the table.

One thing to keep in mind, too, is that some games allow you to play solo. These types of games are perfect for people who live alone or those who want to be able to play a board game at any time.

Complex games can be great…once you get the hang of them. However, beginning players might not have the patience to spend hours exasperatedly leafing through a rulebook the size of a dictionary.

For that reason, consider your and other players’ levels of expertise. Are you familiar with the game already, or is it new to you?

If it’s new to you, you can find gameplay reviews or videos online to give you an idea of what you’re in for in regards to the learning curve.

Sometimes, you get together with your family or friends for a whole night of gaming. Snacks, drinks, and fun are had over the course of an evening.

But at other times, you might want something you can set up, play, and put away quickly. You might not necessarily want something that will take the better part of an afternoon to sink into.

Make sure you take a look at the estimated game time for each option. Determine how long you’re willing to sit down and play a game at one time.

Some board games have an exhausting setup. With hundreds (sometimes even thousands!) of pieces, you can spend the greater part of an hour just putting everything together.

For some people, this isn’t really a drawback. Some legitimately enjoy sophisticated boards with designs that can be changed or customized for each game.

However, other people might prefer something that can be set up quickly. This might be the case if you
don’t have a lot of time or if you’re looking to purchase a game for children.

Most board games will have pictures of the setup. You can review this before purchasing to determine if it looks like it would take a lot of time or if it looks simple.

Clearly, one of the most crucial parts of any Star Trek board game is the theme. You’ll find many sci-fi board games out there, but not as many that are centered around the Star Trek universe specifically.

Even some purporting to be Star Trek games aren’t entirely consistent. Like with the Monopoly Klingon Collector’s Edition, a few of the pieces or components might not fit the theme.

Many players note that certain characters or pieces don’t behave like they would in the show, such as Federation pieces being aggressive. This may not be important to you if all you want is a board game with a shallow Star Trek makeover. If you’re really into the universe, though, it could make a huge difference.

If you’re looking to dive into the universe of Star Trek outside of the show, a board game can be the perfect way to do so. We hope you’ve shown you some intriguing options you can bring to your own tabletop sometime soon.

Our personal recommendation from the list is Star Trek Catan. This is because we’ve played Settlers of Catan ourselves before, and we know this strategic game is popular for a reason. We think the format is a good fit for the Star Trek universe.