Angels are some of the most fierce creature cards in MTG, flying or otherwise. Read on and discover what makes these 10 the best Angel creatures MTG ever thought up! 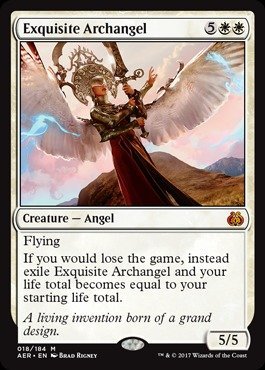 The number one card on our list of the best Angel creatures MTG ever created is Exuisite Archangel. A 5/5 flyer of mythic rare status, she has a casting cost of 5 colorless and 2 white mana.

If you are going to lose the game while this angel is on the field, you may exile this card instead and your life goes back to the 20 life points you started with. 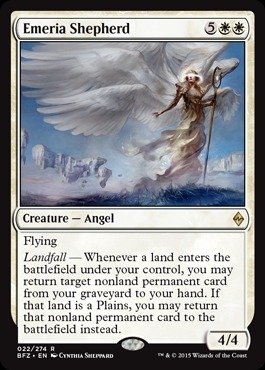 Emeria Shepherd is a 4/4 flying white Angel of the rare class. It has a casting cost of 2 white mana and 5 colorless.

This impressive Angel has Landfall. That means whenever a land comes into play under your control you have the ability to return a nonland card from your graveyard to your hand.

Further, if the land is a plains, you may return the card to the battlefield from the graveyard, instead of to your hand.

Emeria Shepherd is great for keeping your downed creatures back on their feet. 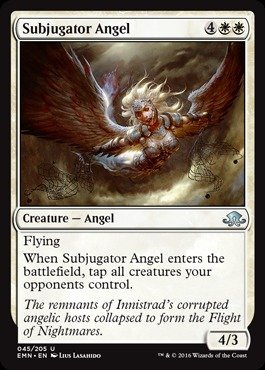 Subjugator Angel is an uncommon white card with a casting cost of 4 colorless and 2 white mana. She sits at number three on our list of the best Angel creatures MTG has ever printed.

Not only does she have a power of 4 and a toughness of 3, but she has also flying. And, when she enters the battlefield, your opponents must tap all creatures they control.

Talk about a wicked beautiful ability that will screw your foes over! 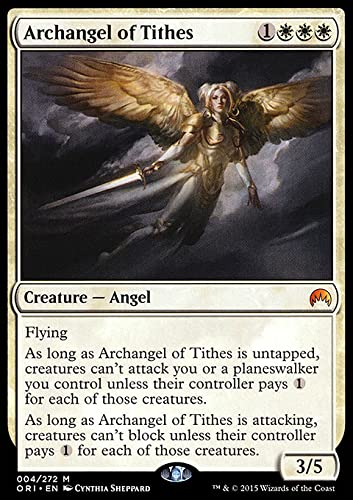 The Archangel of Tithes is the second mythic rare white card on our list of the best Angel creatures in MTG.

With a casting cost of 1 colorless mana and three plains, this 3/5 flying Angel is well worth the cost.

When Archangel of Tithes is not tapped, creatures your enemies control can’t attack you unless their owners pay 1 mana for each creature.

Even more, when Archangel of Tithes is attacking, creatures can not block unless their owner pays 1 mana for each one. 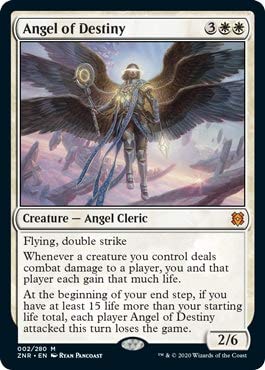 Angel of Destiny is a 2/6 mythic rare Angel cleric with Flying and double strike. The casting cost is medium-high, at 3 colorless and 2 white mana.

One of the best features of Angel of Destiny is that whenever a creature you control deals combat damage to an enemy player, you gain that many points in health.

The downside to this life-gaining ability is that the opponent also gains that much health.

Also, at the end of your turn, if you have at least 15 life or more, each player that Angel of Destiny attacked this turn loses the game.

Wow. Does it get any better than that? We don’t think so. 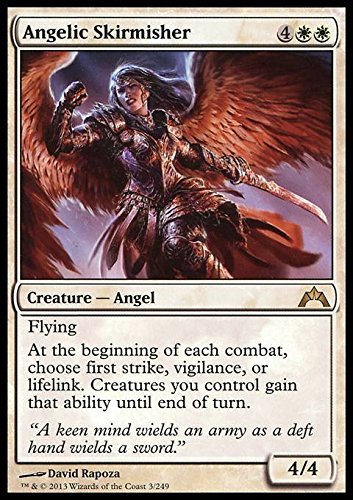 Angelic Skirmisher is a 4/4 flying angel of rare status. She has a 4 colorless and 2 white mana casting costs, which is semi-expensive.

That said, at the beginning of each combat phase, you may choose first strike, Vigilance, or Lifelink.

Whicher ability you choose? All your creature gain the ability for the rest of your turn. 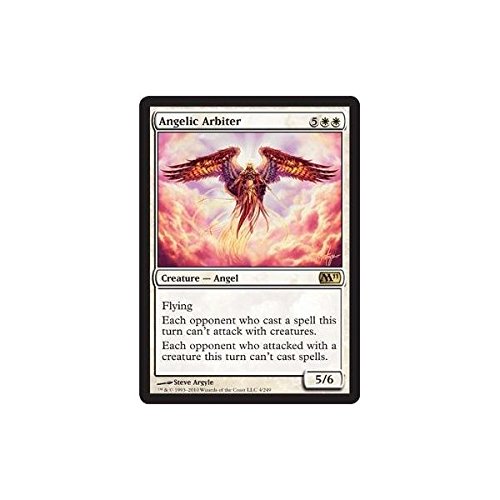 Angelic Arbiter is a flying Angel of the rare kind, with 5 power and 6 toughness.

When she is on the board, each opponent who casts a spell can’t attack with creatures for the rest of the turn.

Plus, each player who did attack with a creature can’t cast additional spells for the turn. 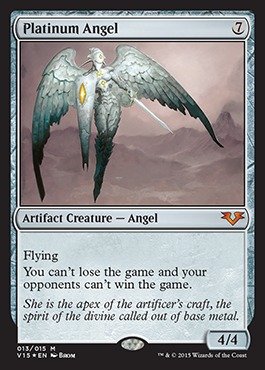 Platinum Angel is yet another mythic rare angel, but not of the white school like the others on our list.

This 4/4 Angel is classified as an Artifact Creature. It has flying, like most angels.

The most powerful ability of this angel is that your opponent can’t win the game when she’s on the board.

But, you can’t win the game when she’s on the field either. 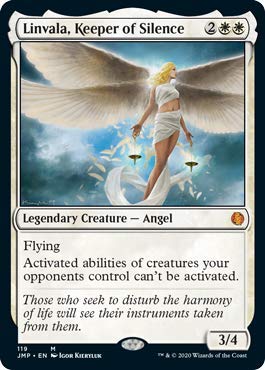 Linvala, Keeper of Silence is the second to last card on our list of the best Angel creatures MTG has released to date. It is also the last mythic rare on our list.

She has 3 power and 4 toughness, with a fair casting cost of 2 colorless and 2 white.

What makes this Angel so powerful is that your opponent’s activated abilities (of creatures) can not be activated while she is alive on the battlefield. 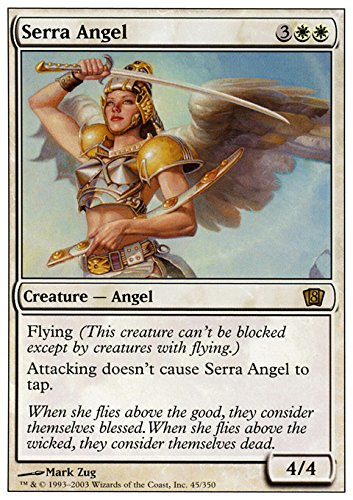 Serra Angel is an oldy but a goody. She is a 4/4 with flying and classified as rare.

Her casting cost is fair for her strength and abilities, 3 colorless and 2 white mana.

She also comes with pseudo Vigilance, meaning she doesn’t tap when she’s attacking.

Are Angel Creatures In MTG Really That Great?

Angel creatures are not only strong and tougher than common creatures (of any color), but they also typically have Flying and other unique abilities. Angel abilities include life gaining, tapping or untapping creatures, dealing damage, preventing damage, and more. They also have affordable casting costs compared to other strong creatures.

How Do You Win At MTG With Angel Creatures?

Winning the game using Angel creatures basically revolves around getting as many Angels onto the battlefield as possible (and keeping them there). When your Angels enter the field or leave it, they may activate useful abilities. They also have flying and may fly right over your enemy’s creatures and deal direct damage to players. Simply cast your Angels and put their flying and abilities to work.

How Many Creatures Should I Put In My MTG Angel Deck?

If you are playing with an all-out Angel deck, each creature card in your deck should be an Angel. If you have a Planewalker or some other potent mythic rare creatures, you may want to substitute 3 or 4 Angels out for them. Anywhere from 15 to 30 Angel Creatures is preferred.