Home » MTG » MTG Artifacts with Hexproof (Should You Add Them to Your Decks?)

Magic: the Gathering can get pretty competitive, even when you’re playing casually with friends.

And there’s nothing quite as irritating as when you’ve built a strong battlefield, and then your permanents get destroyed by an opponent’s spell.

Because there are so many cards available, there are tons of ways to protect yourself from this. But perhaps one of the easiest ways is to use cards with hexproof.

Artifacts with hexproof can be especially useful, because many can attach to a creature and protect it. But which ones have it?

We’ll help you find MTG artifacts with hexproof in this guide. You’ll learn:

If you’re a Magic novice, you likely don’t know all the key words and abilities cards can have just yet. In that case, hexproof might be a new concept to you, too.

Hexproof is an ability that some cards have – including some artifacts. What it does is prevent opponents from targeting the hexproof card with spells or abilities.

However, the card’s controller can still target it if they choose. That means your opponents can’t touch it, but you’re free to add enchantments or equipment to it as you need.

You can think of it as a sort of one-way shield. It keeps enemies out, but you can get in.

If hexproof sounds familiar, there’s a good reason for that. It’s a lot like shroud, an ability that was first introduced in the Legends set in 1994.

Shroud prevents a card from being targeted by spells from anyone. It’s basically a weaker version of hexproof for that reason.

With shroud, neither you as the controller nor your opponents can use a spell or ability on the card.

Compare that with hexproof, which permits the controller to use spells or abilities on the card, but not enemies. The usefulness here is apparent.

Being able to continue to buff a permanent with auras or equipment can be game-changing, especially in a Voltron-style deck that relies on pumping a creature with as many of these as possible. You can accomplish this with hexproof, but not with shroud.

Despite there being a ton of cards in MTG, there still aren’t a lot of artifacts with hexproof at this point in time.

Some of the artifacts on this list have hexproof themselves, and others give hexproof to a creature when they’re equipped. A few artifacts even give you as the player hexproof.

Basically, the list includes any artifact that in some way interacts with the ability hexproof, whether it’s to give it or take it away. 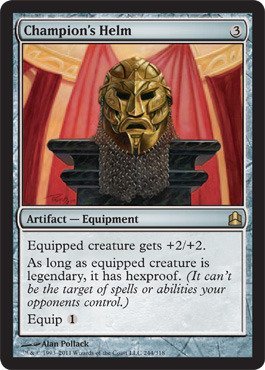 As you can see, Champion’s Helm bestows a creature with hexproof as long as the creature is legendary. This card would be particularly useful in Commander, where the commanding card has to be a legendary creature. 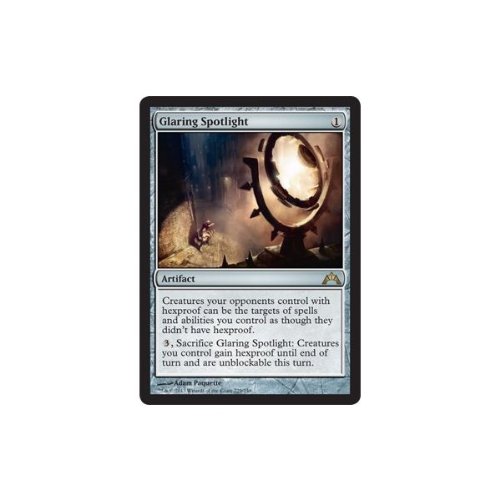 If you find your opponents using hexproof as a shield, then you need a Glaring Spotlight. This allows you to target their permanents with spells and abilities, and temporarily grants your creatures hexproof in a pinch. 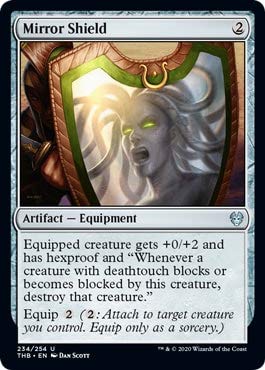 Deathtouch is a useful ability in a variety of formats, because it basically allows a tiny creature to destroy a much larger one easily. You can defend against it with Mirror Shield, which gives your creature hexproof and destroys deathtouch creatures if your creature blocks or is blocked by one. 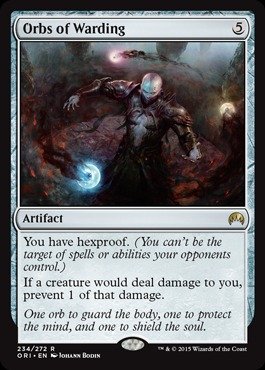 This is one example of a card that gives you hexproof instead of one of your creatures. What does it mean to be hexproof as the player?

It means your opponents can’t, for example, use a spell to deal damage directly to you and your life total. 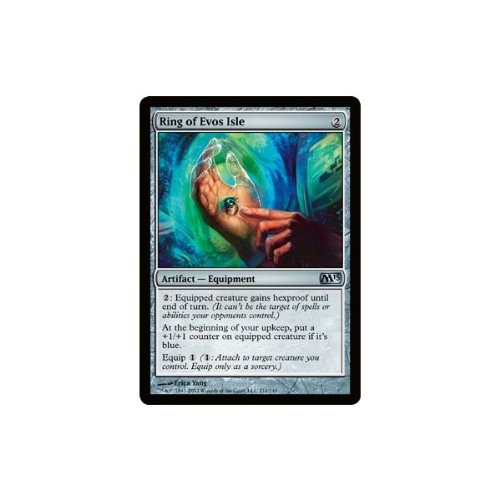 You’ll get a couple different uses out of Ring of Evos Isle. If you’ve attached it to a blue creature, that creature will get a nice +1/+1 increase to its power and toughness on your upkeep.

Of course, you can also pay two to give it hexproof temporarily. This isn’t quite as nice as permanent hexproof, but it does give you the ability to protect your creature if someone targets it. 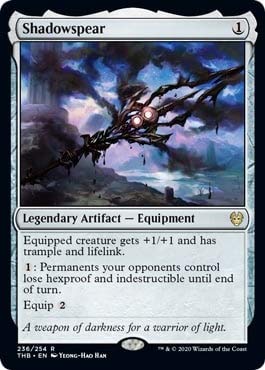 Unlike most of the others on this list, Shadowspear isn’t about granting something hexproof – it’s about taking it away from others. On top of a small boost to power and toughness, trample, and lifelink, Shadowspear removes both indestructible and hexproof for a turn. 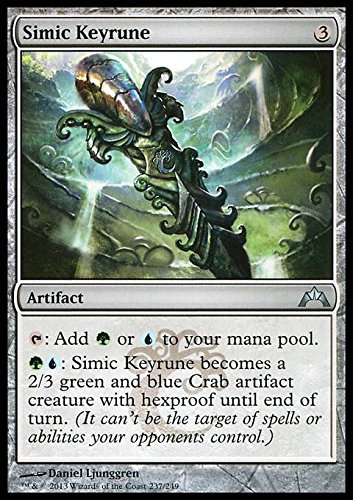 The interesting thing about Simic Keyrune is that, for one blue and one green mana, you can turn it into a crab for a turn. The crab has hexproof, so it can’t be targeted by your opponents.

When the turn is done, the Simic Keyrune turns back into an artifact that you can tap for mana. That means you can use it for mana, and the crab aspect is protected from opponents’ sorceries that would wipe creatures from the board because it reverts back to an artifact.

Sphinx of the Guildpact 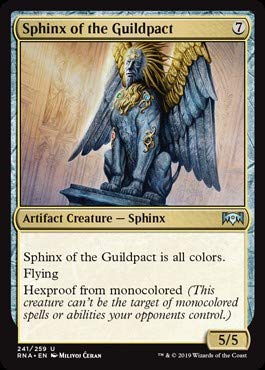 As the only artifact creature on this list, Sphinx of the Guildpact can attack or block consistently – without having to pay to turn it into a creature, like with Simic Keyrune.

There is, however, a caveat with its hexproof: it only applies to spells and abilities from one-color cards.

Aside from a somewhat high equip cost, Mask of Avacyn is a nice way to protect your most important creatures. On top of hexproof, it gives a small boost to your creature’s power and toughness.

If you’re not able to get your hands on the lower mana-cost Lightning Greaves, Swiftfoot Boots is a decent substitute.

It doesn’t cost much to cast, and it gives you a creature with hexproof and haste. If you have enough mana, you can attack with a creature right after casting it if you throw Swiftfoot Boots on it.

Curses aren’t necessarily used a lot today, but if you do find yourself subject to them, Witchbane Orb will banish them for you.

Furthermore, it grants you hexproof so you specifically can’t be targeted by your opponents.

That’s the list of artifacts with hexproof. You may want to consider adding some of them to your deck if you’re concerned about opponents targeting you or your creatures often.

Shroud is also an alternative to hexproof, if you are not able to get many cards with hexproof. Just keep in mind that it means you will also not be able to enhance your permanents with any spells or abilities.

Want to learn more about the sets artifacts come from? Take a look at our list of MTG sets with the most artifacts.